So I set to, to re-align the guttering on the Gazebo, or as it is called here a Quiosko, and I couldn't even get that right, for five plus years I was spelling it Kiosko!

I took the entire set up down, and put up a string-line, at which time it was obvious that I had a problem, fortunately not of my making, but the string told me that to get the flow in the right direction, the existing bargeboard was not sufficiently deep.

Over the last three and a half years since re-building the Gazebo, the land has moved...significantly, and the flow was going the wrong way, because the gazebo had sunk at the wrong end.

I either had to replace the bargeboard completely, or add supports for the guttering hangers to attach to. replacing the bargeboard, would also have meant removing part of the roof, and for the gazebo that was time and expense I didn't want. I therefore cut a piece of the same type of timber, where two pieces of guttering joined,, and screwed and glued it to the bottom of the bargeboard, then nearer the end, I needed to extend below and beyond the end of the bargeboard, so I took a thicker piece of timber, and using my dado blade on the table saw, cut a rebate the width of the existing bargeboard, then glued and screwed this to the back, this gave me enough space to attach the 'T' piece which attaches to the down pipe.

That done, I put up the original 3m length of guttering, the join, and then the 'T' piece, I then cut a new length of guttering to fit in the space, followed by a new section of downpipe, with a couple of angled joints, these I will have to paint later. 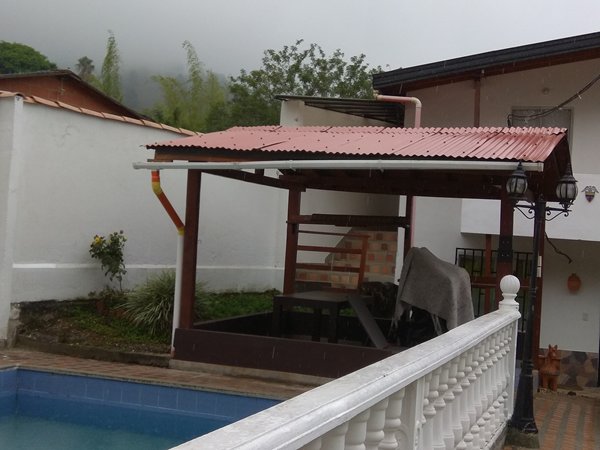 I had just finished assembly, and the heavens opened, so I tidied everything away, cleaned up the workshop and called it a day.

I admit that it doesn't look pretty, and I thought the water might miss the guttering as it came off the roof, but it does work, and without rebuilding the gazebo, it will have to do.
By Phil Sale at April 11, 2018