I eventually bought my 'black' plywood last week, I bought three sheets of 18mm, which should be enough, to complete the project, the 'L' shaped desk, each sheet is 1.22m x 2.44m, 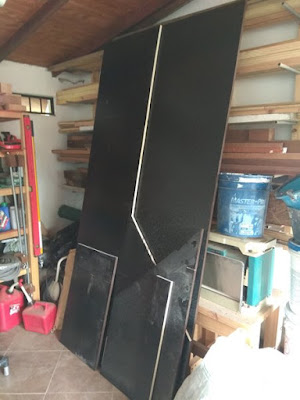 fortunately one of the Storemen helped me load them into the trailer, along with a couple of 2x4s, it wasn't quite so easy unloading them once home, as Marcela was at work, so I had to do it myself, being 18mm, not only were they an awkward size, but they were heavy as well.

This morning I decided it was time to get stuck in, the first sheet went on the sawhorses, and I cut after measuring a number of times, even after over forty years of woodworking, I have still learned that you can never measure too many times, but you can only cut once! The desk will measure 244cm x 60cm on one wing (the part you can see stood from top to bottom), and 200cm x 50cm the second wing, to do this, I have had to cut a separate piece to add to the 122cm of the main board, this will be joined from underneath.

It was then stood back in the corner with the other sheets, whilst I started other work. That being to alter the existing desks, I decided that rather than throw the two existing desks out, I would use them, not only to help support the new top, but also to change them, so they become a carcass, for two sets of drawers, this needs some careful work, because one if not both are chipboard, however once in place that wont be a problem, as they will never move again, and there will only be downward pressure.

I took 'Marcela's desk' first, because it is just used as a dumping ground for her papers, I removed the shelves on top of the desk, altered the struts at the back keeping it from collapsing, so they would not be in the way of the new drawers, and that was another part of the job done.

Tomorrow I will make a start on cutting out the panels to make the drawers, and maybe my photos will make more sense.