As I said in my previous post, I went to the Mother-in-laws and put up a shelf for her, in so doing reminded myself why I don't go more often, she was really frosty, I was glad to finish and get out.

From there, I went to look at brush cutters, and ended up buying a Husqvarna, apparently they are as popular as Stihl over here, and a bit cheaper. 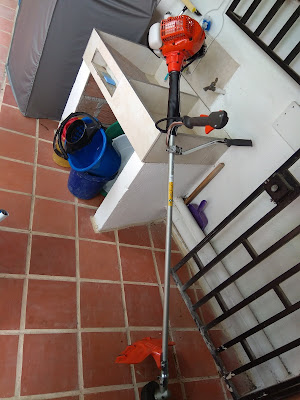 I bought it from an Agricultural Suppliers, and was given the option to buy it ready assembled, which was a nice touch, and didn't cost any extra.

Back home, I went to attach my existing brush cutter head to the Husqvarna, but it wouldn't fit the head bolt is an M12 and the previous was a M10, so I had to use the bump head that came with it, I have since ordered a new head the correct size. I cut the grass, and you could definitely tell the difference between this professional version, and the Chinese copies I have bought in the past.

This morning I had to tackle one of my least favorite tasks...painting, I had noticed last week, that we had black mold starting on the outside wall of the ensuite shower room, so first job was a bleach wash, which removed the mold immediately. The reason for the mold...the fact that Colombians very rarely render the outside of their houses, therefore the rain finds it's way into the brick/blockwork, and rain we have had plenty of this year.

Whilst the wall was drying out, I painted the second upstairs toilet/storeroom 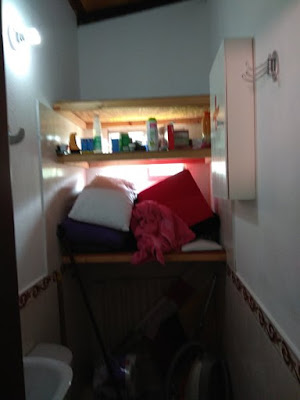 It doesn't take long, because the rooms are so small, and this one is half tiled.  By the time I had finished the other was sufficiently dry to paint. 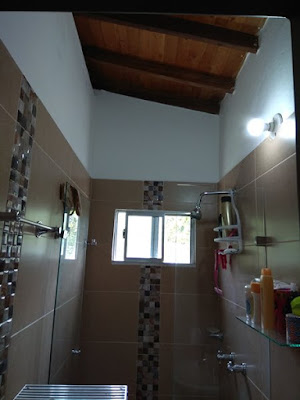 This took even less time, as the tiles cover two thirds of the wall, the awkward part is getting the step ladders in there, due to lack of space.