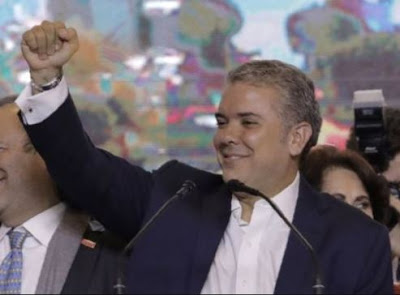 His critics are already stating that means Avaro Uribe is in effect in charge, this despite claims by Duque himself that he is of a new Generation, and will not be following down Uribe's avenue.

I was neither a Duque nor Petro supporter, I don't think either will bring about the change that this Country needs or wants, but at least Duque is the least likely to cause harm to the Country in the long term. He has to be given a chance to prove the claims he is making. People say he will be bad for the Peace Process, I have to ask what Process? as soon as Juan Manuel Santos got his Nobel Peace Prize, everything seemed to come to a halt, supposedly there was no more cash, well, where did it go then? because they were pledged International cash, it can only have gone into the pockets of those with the purse strings, but what did Santos do about it?  If Duque changes the terms, and the people are in agreement with that, I don't see the problem, it is not, and never was for the 'terrorists' to dictate terms.

Gustavo Petro on the other hand, has made numerous claims, indeed his supporters state he is a Socialist, not a Communist, and that reports he would take Colombia down the same road as Venezuela or Cuba are total rubbish, and yet history says otherwise, in 2003 it was reported that Petro was a friend and close advisor to Hugo Chavez of Venezuela, and was instrumental in helping to set up the Government of the day During his time as Mayor of Bogota he had some good ideas, but no idea how to implement them, in the end he was removed from office, that could not happen if he was President, that in itself is a frightening thought.

Unfortunately Colombian Expat Media have openly supported Petro, instead of giving a balanced view, I was a big supporter of Colombia Reports an online newspaper, giving us daily news, but in my view it overstepped the mark and became the online mouthpiece for the Socialist supporting Editor, with comments from people who should know better, and in many cases don't even live in the country. I'm all for free speech, but then at least back up that garbage with evidence to at least make it sound as if they know what they are talking about.

Let's at least give Duque a chance, he takes Office on 7th August, if he proves to be a good President, then the Voters will have made the right choice, if he is bad for the Country, they can wave good-bye to him in 2022, at which time, hopefully a Candidate will come along, who can unite the country and take it forward.