Hi Guys, it's been a quiet few days, in as much as there has not really been anything worth writing about, that doesn't mean I have been sitting on my laurels, far from it.

I have spent two days communicating back and forth between Spain and Ireland, over some financial matters that went haywire, but I think are now back on track.

I have also spent a lot of time preparing all the paperwork for my annual Colombian Tax Return, something that is not an option, and I have learnt that if I have it all in order and listed, it makes my Accountant's job much easier, and keeps her bill down. Unfortunately an Accountant is a necessary evil over here, they have to at least sign off your Return, so they might as well do the whole job.

Yesterday I went shopping, both in Copacabana and Bello, the latter because it is the only place I can get a cheese that is palatable, it doesn't have much taste, but it is fine for cheese on toast or grated on salad. I have to be honest, Colombia sucks when it comes to cheese, and it really about the only thing I miss, that I haven't been able to substitute for something else. Yes, they sell cheddar, and all the other foreign named cheese, but cheddar, doesn't come from the UK, it comes from the US, and is like eating a salt block! So this double cream cheese has to do.

Having shopped I made my way home, and had lunch, again yes, at home! no lunch out. I put all my shopping away or so I thought, until this morning, when I couldn't remember bringing my cheese into the house, I checked the fridge the pantry and everywhere else I might have put it, including the freezer, I checked the car as far as I could, but no trace of my cheese.

I decided that I must have put it on the car roof, when I was unlocking the car door in the car park, and driven off, so I spent time cussing myself, yet again. Then when Marcela left for work, I had more room so opened the car up, and lo and behold, there it was under the passenger seat, it must have rolled off the seat on the way home. 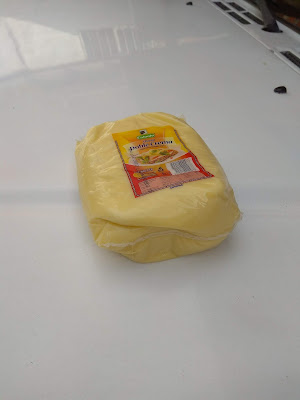 It was looking very sorry for itself, and it had gone very soft in the heat, whether it is edible now, I have no idea, but it's back in the fridge for the time being.

Having regained my sanity, to some extent... I decided to clean out the road drain, the Local Authority don't do this, it is left up to the locals, unfortunately 'Enimigo' has no interest, as he only has businesses here, he doesn't live on, so either I do it, or it doesn't get done. With all the rain coming down the road, if the drain is not cleaned out from time to time, the water cascades down the road taking the road surface with it, so for 20 minutes work, I feel as if I have done my bit for the Community. 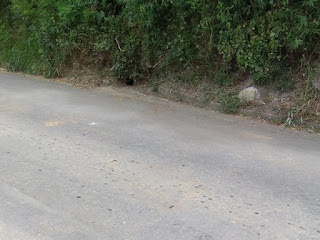 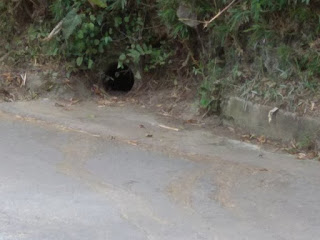 It fills with leaves and muck off the road surface, unfortunately because there is a bend in the pipe, it blocks and builds up.

After that episode, it was time to do some pruning, the Dame de la Noche had grown again, but a trim was not on the cards, because it was looking too spindly, so it was cut right down. 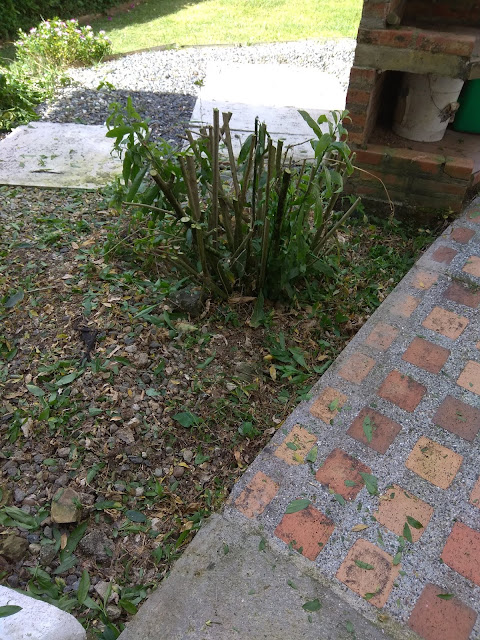 That meant I then had to cut up all the prunings to fit in sacks so I can leave then for the binmen. 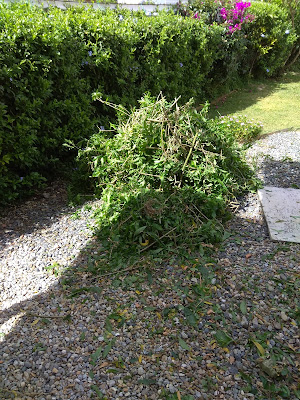 However I will bag them up another day.

That just left me with one more job for today, and that was re-weathering the wooden hand rail I built on the staircase.

I wiped it down, gave it a coat of weatherproof stain, and left it to dry, and I have just finished giving it a coat of varnish to finish it off. 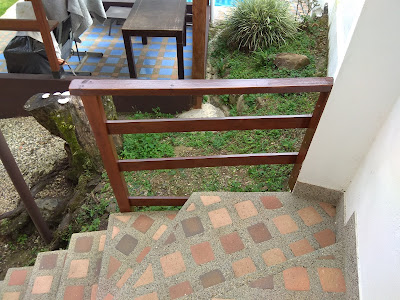 Hopefully that will now last another couple of years.

We have finally made a decision regarding the swimming pool, because we have made a decision to move from Copacabana in the not too distant future, I don't want to get rid of the pool, so I am going to repair it, I have sent for a multi-tool similar to a Dremel, but a lot cheaper, and will use the tile grout remover blade to  remove all the grout, and broken / cracked tiles, then replace and repair, at the end of which, we will put the finca on the market...at least that's the current plan. It will not be a quick fix, because to a great extent I will be governed by the weather. 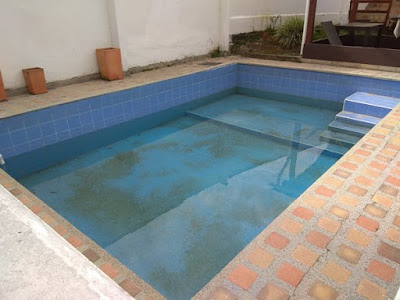 At the moment the water level is dropping, both due to the heat, also the cracks, so I will let it continue to drop, and it will be less to pump out, then little by little, I will get the job done.
By Phil Sale at July 10, 2018