This project is going to take months, so needs some careful preparation, and it has already got off to a rocky start.

Swimming Pool renovation!  I will be clear on this, we have no intention of refilling the swimming pool during our time here, we don't use it enough, and to be honest, because of that, neither of us has enough interest to  maintain it. so there is always the possibility it will collapse, without water to keep pressure on the sides.

Last night and today, I have been emptying the pool, of what water was left in it (about half), after evaporation and leaks. We had consulted some time ago with the local water company, and were told we could empty the water into the road, as long as it was free of chemicals, and from the number of mosquitoes present, it obviously was.

However doing this seemed to attract some unwanted attention, especially from one of Enimigos, black druggie employees, who decided to take photos, not that I am worried, about that, because I have video of them swilling paint down the road, from when they were working on the illegal apartment.

This is just a clip from the video to show what I mean.

The only people who could take action against us are the Town Hall, but since they have failed in their responsibilities 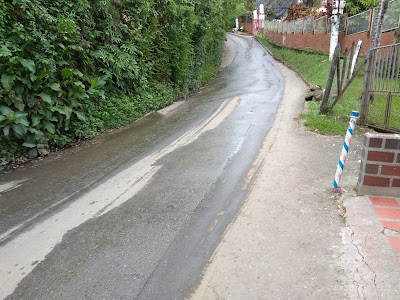 in repairing the communal septic tank further up the road, and allowed urine etc. to flow down the road for months, I don't think they are in any position to say anything, or at least it gives me ammunition if they do.

Anyway the pump was diverted into our septic trap, and then into the pipe to the stream, we kept checking to ensure there were no leaks in the neighbour's lane below, there weren't, so we were able to dispose of the water.

I then started bailing out the rest by hand, using a jug and mop buckets, but in the heat, and after 20 buckets, it was exhausting, and getting nowhere, so I talked it over with Marcela, who offered to help when she got home from work, but the shallow end is dry, so I can work on that, and hopefully the sun will evaporate the rest in the mean time.

I have bought myself an oscillating multi-tool, and now the job is to decide which tiles need replacing, and the rest, I will remove all the grout, using the multi-tool, then re-grout the whole pool.

It is going to take weeks if not months, so the intention is to buy enough polythene to rig up a tent like cover over the top, to both give protection from rain, and allow me to continue working even if it is wet. with the pool itself being 6m x 4m that will be a fair expanse of polythene, so I am going to have to rig up some supports. The existing pool cover, would have been too heavy for this purpose.

Once all that is done, the path around the pool will have to be tiled, as the existing path is cracking due to land movement.

Then once it is all finished, we will again consider putting the finca on the market, and moving far  away from here.