Well that's another week-end we are glad to see the back of! No help whatsoever from the Alcaldía de Copacabana, or the Policía Nacional to control the noise from the Finca de Recreo.

The Alcalde / Mayor moved the Fiestas de Naranja from the end of the year to July yet again to avoid the wet weather, and they had three nights of torrential rain, so those watching the concerts left like drowned rats.

Thanks to the Alcalde Oscar Restrepo, and the poor organisation of the Fiesta de Naranja, a piece of Copacabanas history was destroyed, in an effort to screw more money out of the Community, a road circumventing the town center park was closed and space given to kiosks, but that meant supplying them with electric, so a cable was taken above the road, but not high enough. A local delivery lorry passed by, snagging the cable which demolished a statue, that had been part of Copacabana for years, unfortunately that then injured a passer-by.

Not a good week-end for Oscar Restrepo, he will be remembered for being the Mayor that couldn't even organise a "Piss-up in The Park".

This morning, after having been to do the shopping, and finding the town still in chaos, and yet to be returned to normality, it was time for some work in the pool again.

I put my Multi-tool to one side, and got out my angle grinder, to cut up the tiles that needed replacing, then using a hammer and large screwdriver, I knocked them out. 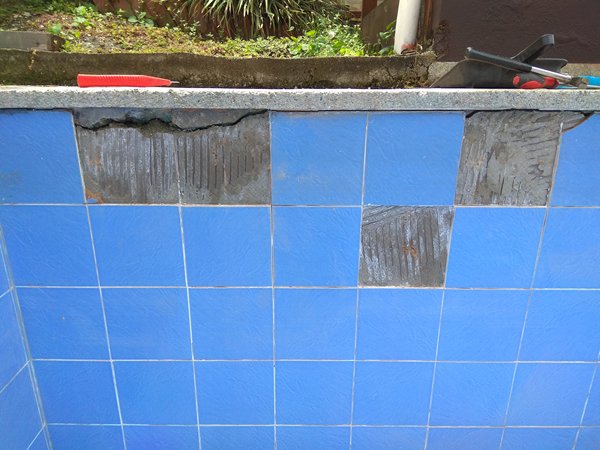 Unfortunately as you can see on the top right, it doesn't always go to plan, I hadn't cleaned out the grout to the top of the tile, and it took out the corner of the adjoining tile, which will now also have to come out.

The horrendous crack top left, is from land movement, I will have to clean that out and fill it will hydraulic cement, before fitting the new tiles, those fortunately will not be a problem, as the previous owner, left enough surplus pool tiles to renew them all...OK that's a bit of an exaggeration, but you get the picture!

The next job is to grind out all the old adhesive used to stick the tiles in place, so the new tiles will not be proud of the others.