Work in Progress and Not Mine!

Copacabana is absolute chaos today, and will be until after Sunday, as they prepare for the Festival of Oranges, don't ask me why it is called that, no one seems to have any idea, there is no orange production in the area, and from what we can make out it is just an excuse for a three day piss-up, the Mayor seems to spend a fortune on things for adults when it should be an event for the family, but there again, from the published photos that seems to be how he spends his life, at our expense.

The work on the adjoining property has progressed throughout the day...slowly, there have been two of them on site, a worker, and the youth who is son of the Foreman, and lives in the apartment above the Barbers, who seems to have spent his time supervising. 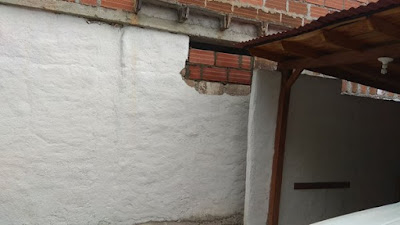 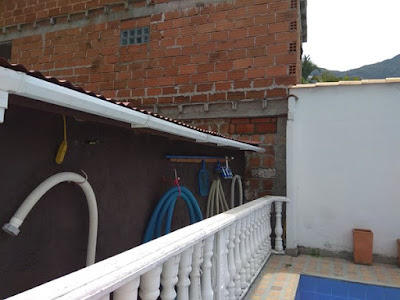 in all they have filled three of the windows today, these two being the ones that really worried me, because they gave direct access into our garden, and the 'security bars' were a joke, a car jack would have pried them open in seconds.

However I am not impressed with their work ethic, the youth, who seemed to be happiest with a hammer smashing things up, just let it drop onto the garage roof. pieces of brick, bits of the glass blocks, all things that could have caused damage, but fortunately didn't. 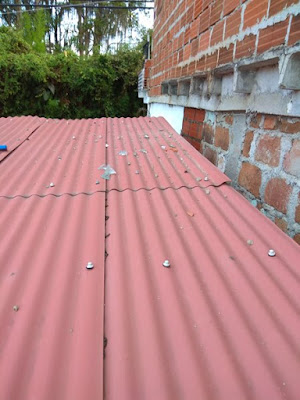 Anyway, I kept out of the way until they had finished for the day, I didn't want to up my blood pressure, but once I knew they had stopped work, I went up on the balustrade with the extending pool broom and brought all the bits down, where the 'Worker' brushed everything up and took it away, stating that tomorrow they will put plastic sheeting on the roof before they start. Once they have finished I will wash the roof off with the hosepipe.

That apart, the boys are looking very smart now, and make me feel positively scruffy.

I was going out tomorrow, but I don't want to be away whilst demolition work is still in progress, so I'll stay and work on the 'new' gymnasium, removing the grout, and go out on Wednesday instead.
By Phil Sale at July 23, 2018