Friday, I took the trailer and went to Homecenter, I wanted a sheet of hardboard and to replenish my 2x4 stock, but they only had two lengths of 2x4 that didn't look like an imitation banana, so I added a 3x2 as well, but I needed a cart for carrying timber, and they all seemed to be in use by Staff carting stuff around, so I grabbed a lad who was passing and asked him, he had a brief look, then said there were none, I asked him what I was supposed to do, and he said to look around the store for one...Thanks Sebastian! Instead, I dragged the timber I wanted around to their help desk, as I needed the hardboard cutting into two, they gave me a docket, which I took to the cashier, to pay for, on the way, I found an abandoned cart...sorry Mister! hahaha and took it.

I went back to the help desk, and told them I would go and fetch my car and trailer to pick it up, as it was parked streets away, they won't let you in to the car park with a trailer, and they wont let you into the commercial collection point without a receipt, so there is no choice but to hoof it.

I collected my purchase, and made my way home, then it was into the workshop with one of the pieces of hardboard, and do something, I have been meaning to do for literally years, and that was to top my workbench. 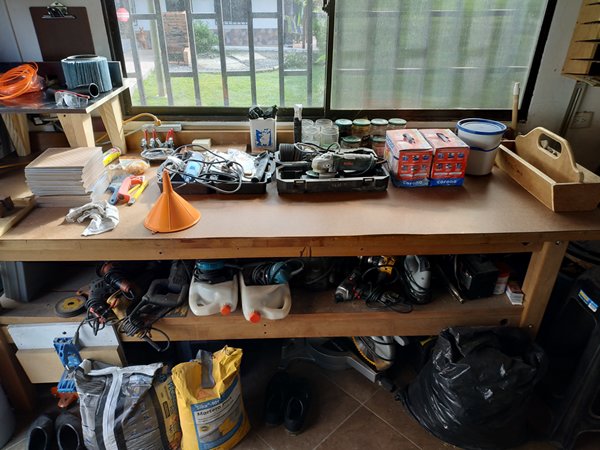 OK I know that it doesn't look much tidier at the moment, because all my tools for the swimming-pool renovation are laid out on top, but believe me it is a great improvement, it stops all the dust and small screws, nails etc. dropping between the planks onto the tools below, and when it gets too tatty, it can be replaced, it is just stapled onto the top.

Yesterday, I went and had the oil and filters changed on the Montero, after which I went into the Commercial Center at Niquia, did some shopping, before meeting up with Marcela for lunch, before she went to work.

Today, what a day, Sunday and a full days work, things will have to change!

After walking the dogs, I had breakfast and then did my usual week-end chores of cleaning all the bathrooms, it was then time to venture to the pool, and get the cover over the pool.

I jet-washed the cover on Friday 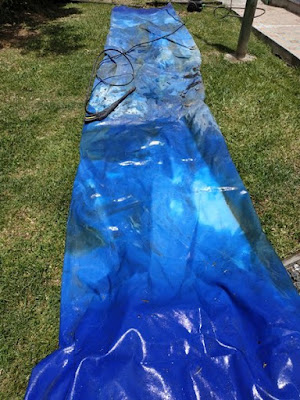 but I needed help, so had to wait for Marcela, unfortunately we had a storm last night, so I had to do my vacuuming first.

We managed to get the cover in position 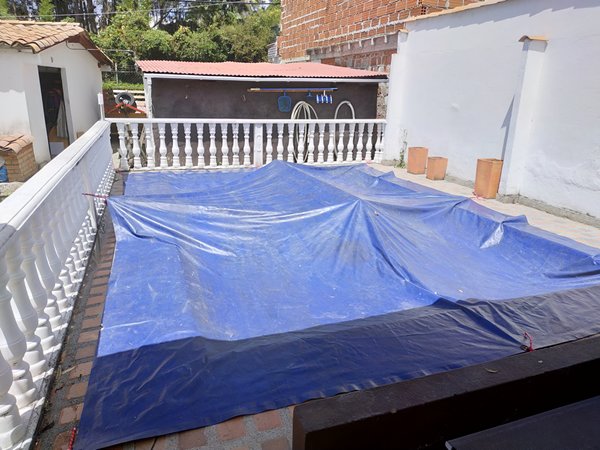 but however much we tried we could not get enough tension on the cover to be able to stop water pooling on top, I looked at putting more timber supports from the side of the pool to the new central support, but that just shifted the problem, so the cover was removed, as was the central support 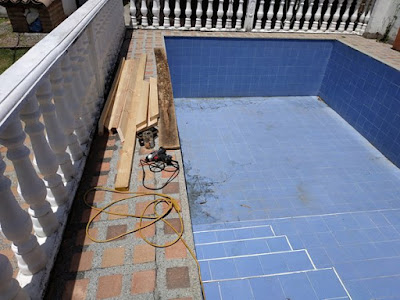 Well, if nothing else it has increased my timber stock once again.

This left me with only one other option, which I had discussed with both my Brother, who was a Surveyor, and my eldest Nephew, who like me, is very hands on, and the option left to me was to install a sump pump, but that meant cutting out four floor tiles and breaking through the concrete floor of the pool, digging down and lining the hole with concrete, then inserting a water pump.

The lowest spot on the pool floor, where the water pools, is at the bottom  of the steps, so that is where work began. 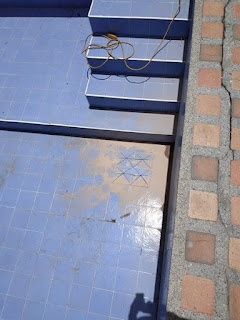 firstly I removed the grout around the four selected tiles, then using the angle grinder I cut the tiles into sections for easier removal, using a chisel and hammer. 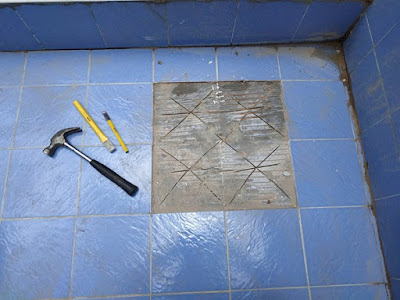 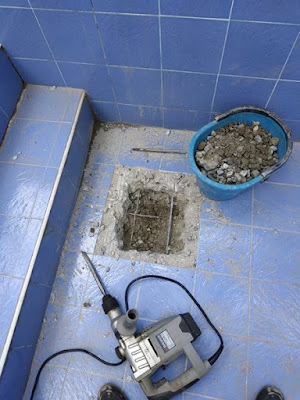 I was a bit concerned when I found that the concrete was only 4" thick, even with the rebar inserted, due to the weight of water it was supporting, but I soon found out why. 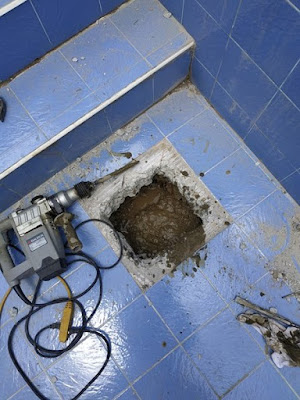 I hit solid rock, and that took some breaking, to get sufficiently deep enough, to line it with concrete, and still be deep enough for the pump, the earth under the pool is saturated, although I don't think I had hit the water table, because the hole was not filling.

Once I had the hole deep and wide enough, with a brief stop for lunch, I made an inner liner from wood, and thoroughly greased it, in the hope that I will be able to remove it without too much difficulty once the concrete has gone off.

I then covered the bottom of the hole in gravel so that the concrete would not be sitting in water, and then I mixed, not concrete but hydraulic cement, which is used for pools, so should be waterproof, I can always paint it afterwards, I have some waterproofing 'paint', left from when we first had a problem with the house wall, I say that but it is probably solid, being four and a half years old now!

I let the base coat partially set, and then set my wooden mold in place, and started pouring the hydraulic cement between the tiles and the wood. 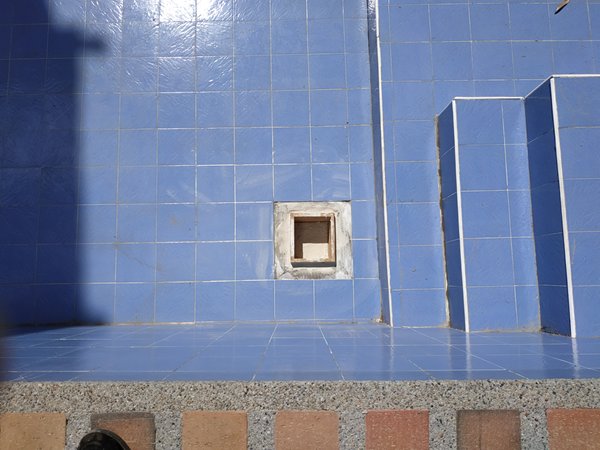 tapping the wood to remove any air bubbles in the cement. This stuff is quick drying, so should be dry later today, and because I only let the base partially dry, hopefully the sides have bonded to the base. Once it is dry, I will remove the wood, and then tidy up the surround, with some fresh cement, and it will be ready to use.

All I will have to do is put the pump in the hole, connect it to the electric, and let it remove the water for me...no more vacuuming!, I will probably have to brush the water to the pump from the far reaches of the pool, but that is still easier than the current system.

The final job will be to go, and have a metal plate cut to fit the space of the four tiles, and then if anyone wants to use the pool as a pool in the future, the plate will stop any accidents, but can be removed if the water needs draining.