Good News For A Change

It looks as if I am staying in Colombia for the time being, we had a message from my Accountant last night with good news, especially as I had been warned that my tax bill could be as much as $12.000.000 COP, suffice it to say, it is not zero like in previous years, but it is less than $1.000.000 COP, and even with my Accountant's fee it is only a tad over that figure, so I am pleasantly pleased, and will go to see my Accountant on Monday, to collect my bill for payment, and pay her, buying a big cake on the way, in the hope she doesn't retire anytime soon.

It turned out that the Medical Center Staff had not given me all the orders needed for the appointments I need, so I contacted my Doc via WhatsApp yesterday evening, and he confirmed the one missing is in the system, he asked me to print off our conversation, take it with me, telling them to phone him upstairs, if they had a problem. I really hate the idea that at some point I will lose him, and I will, because those with responsibility for the High Blood Pressure Clinics, rotate, to ease their workload, and share out the extra pay. Anyway this morning I went and queued for an hour yet again, coming away with all I need.

I was given a reminder today, well most days really, of my former life in Cadiar, Spain 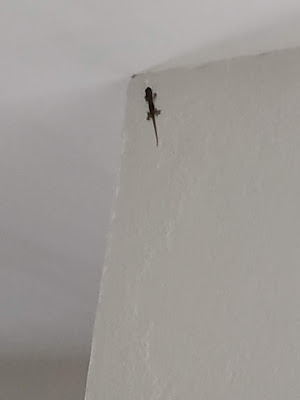 This one's a baby, they are smaller than their Spanish cousins, but they do the same job, keeping the insect population down, the only problem is Pepe! He believes these were put on this earth to provide him with snacks, and they have to move damn fast to avoid him.

I haven't done as much work today, we have had a bit of trouble with the Gas water heater, over the last few days, I assumed it needed new batteries for the ignition, but new ones made no difference, and the answer had to be because it had not been serviced for maybe three years, I had no intention of paying anyone, because having watched the Guy, I knew that all I had to do, was remove the cover, and using a soft paintbrush and the vacuum cleaner, get rid of the dust, which is what I did, and now it is firing up nicely.
Posted by Phil Sale at 13:22