This morning, the Security Camera Engineer was supposed to arrive to replace a dead camera, so first thing, I messaged him to confirm that a) he was coming and b) would it be morning  or afternoon. As you will know by now, I have got used to him not turning up, or changing the day at the last minute.

Sure enough I received a reply, to say it would be tomorrow morning, because he had to order the camera at 7am, and it wouldn't arrive until afternoon... What an earth happened to Monday and Tuesday? this was arranged at the week-end, there is no excuse.  I guess I am getting used to it, but it doesn't do my blood pressure any good.

That out of the way, I started work in my workshop, it looked like a total tip, it was time to tidy it up, that took nearly two hours, but I now have more space. I also serviced the compressor, emptied the tank of water, topped up the oil, and used it to clean my Shop-vac filter, as it is out of the machine, whilst the vac is being used to drain water from the pool.

I then started work in the pool again, I know this is getting boring, but it will probably be the last time this week, so I had to do some.

I used the multi-tool with the rasp blade, in combination with the angle grinder, 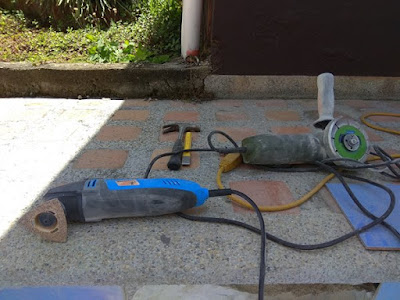 and started cleaning out the space for the new tiles 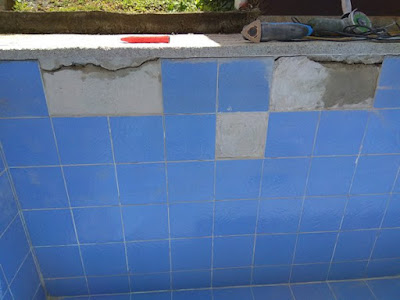 I started left to right, the dark patch is the old adhesive that still has to be ground down, it also highlighted the crack, which I will have to fill, I should really remove all the tiles along the top to repair it properly, but as we have no intention of filling it with water again, at the moment anyway, that isn't going to happen.

Whilst doing this, I had a message from my Brother, to say he was home, we haven't spoken for ages, so it was nice to down tools, give him a ring, and have a chat, then it was back to work again.

After lunch, Marcela headed off to work, and I crashed out.

I won't be posting tomorrow or Friday unless something unusual happens, hopefully tomorrow the new camera will be installed, then I need to dash down town, after Marcela goes to work, then on Friday, I am heading into the city, for the bulk purchases, and to try and find the tile adhesive suitable for pools, also to hopefully find a replacement supply of orange marmalade!
Posted by Phil Sale at 18:36