This morning we were up at 5am, I had a Doctor's appointment at 6.40am, and Marcela wanted to go with me, to ensure both the Doc and I understood the current problems.

As normal the Doc was running late, and I didn't get in until after 7am, he seemed a bit concerned that my  short term memory has deteriorated again since he saw me in June, and decided that I wasn't going to see a Neurologist, but he was sending me to see a Psychiatrist, and also to have a brain scan, the latter seems a bit of a waste of time, I doubt they will find anything in there! I have the orders, now I have to make the appointments, and see how long it will be before I go to see what if anything is the problem.

After we had finished in the Medical Centre, and nipped to a cafe for breakfast, we headed off in separate cars to Bello, and met up at the shop, where Marcela had been I have no idea, because she was flying a head of me, and disappeared down the motorway, but I arrived seconds before her.

The mission was to collect my new mobile phone, which had arrived yesterday, but unfortunately after Marcela had left. I went on to Niquia, where I registered the new Xiaomi Note 5, and paid up for my new SIM card, with the same number as the one that had been lost then stolen. Fortunately I keep the same number and as a bonus the credit left from the old one was transferred over. It took about 40 minutes in all, but I came away with a working phone.

I then did some shopping, and headed back to Copacabana and the Medical Center, to collect the 'Orders' for my appoints, we had left it earlier as the place was packed, but it was still packed on my return, so I took my number and waited my turn. I still don't think they have given all the paperwork, so I might have to contact the Doc again, but at least I can do that via WhatsApp... all very modern here!

It was well past midday before I was finished, so decided I would stay in Copacabana for lunch, and looked out a new Restaurant, I had come across on FB, in fact they had come across me, and sent me an invitation, to their page, not the Restaurant.

Whilst looking for it, I came across a new Bar in town, I don't know if it's because I am a 'former' drinker, but it seemed very inappropriately named. 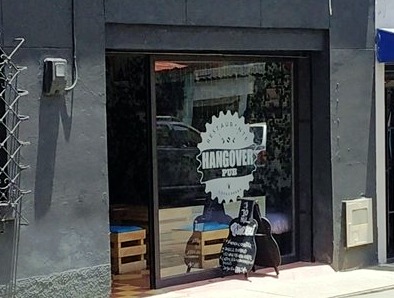 Being in Colombia you would think they would at least call it 'La Resaca', it is certainly a very apt name for a town that has more bars than shops.

Anyway, shortly after, I found the Restaurant I was looking for, it was just up the road, in a premises I had visited previously under a different name.

I walked past it twice, thinking it hadn't opened, as there was a huge plant stood in the centre of the doorway, but when I saw the Gentleman, I asked, and he replied that they had been open since 8am! That plant, might be the reason I was the only one inside, which is a shame, because the 'Menu' was excellent, Pasta soup, meat balls (albondigas) in sauce with rice and plantano, and a drink all for $11000 COP, and make it even better, it was piping hot.

When I left, it was time for home, and then time sorting out my new mobile...I just hope I don't lose this one!