Things came to a head yesterday, the neighbours below us, were having a family party, there is a car park at the top of the road, and the road itself is 2km long, but they had to block our entrance, I caught them parking, and went down to ask them to move, one of the women, a sister of the head of the family, blew a gasket, so I said in that case I would call a Grua (breakdown wagon, in this case run by Transito, the traffic police), she went apeshit, excuse my language.

By this time, Marcela had joined me, and the dispute went out onto the road, we were called all the names under the sun, we cause all the problems in the area, and she doesn't even live here, I lost my cool and used some very ungentlemanly words, that I am not proud of, but I am fed up with this family thinking they can do exactly what they want, even so they refused to move the car, and walked off, so Marcela rang Transito at my request, three hours later, they had still not arrived, and the car had gone, so I gave up, until it returned later, so Marcela rang for Transito again, and eventually they arrived.

There were two Transito Officers, Marcela, myself and about twenty Family members, most of whom were under the influence, not the best of  mixes. The insults and threats flew towards Marcela and me, why Marcela, I still haven't figured out, anyway Transito ordered them to move the vehicles and stayed until they had. But the threats continued, as a result neither of us slept much last night.

Marcela had to leave early for a medical appointment, on the way back, she went to the Inspection of Police (Council enforcement) she saw the same Inspector who had dealt with the neighbours making the false accusation against me back in March, and remembered saying she expected to see us again, anyway we now have an appointment on Thursady afternoon, when those who made the threats will also be summoned. At the conclusion of this process, they will make a protection order, and I will be given some paperwork to send to the Embassy, in case anything happens to me.

On Marcel'a return, we made the decision that we are putting up with no more of this and will move, as Marcela said, we have never really been accepted here, since the day we moved in, there are a few people who are friendly, but like country folk in every country, suspicion runs high, and outsiders are not appreciated. Marcela contacted the man who we used, to buy the house, he gave us a provisional sale price, which is slightly less than we were hoping for, considering we will lose 13% in taxes and commission, but we should be able to find something in our budget, or we could rent, and use the money to buy properties to rent out, a decision we still have to make, we will get a better idea of price when he comes to prepare the sale. We are well aware that the price it goes for sale at, may not be the price we are selling at, but we can live in hope.

Now it is more important than ever to get on and complete the work here. Henry is coming down tomorrow, to act as extra security, and to give me a hand with the jobs, before we have photos taken.

Today, I got on with the pool, the work I did the other day, pouring the liquid hydraulic cement behind the tiles that moved, seems to have worked, and doesn't look too bad 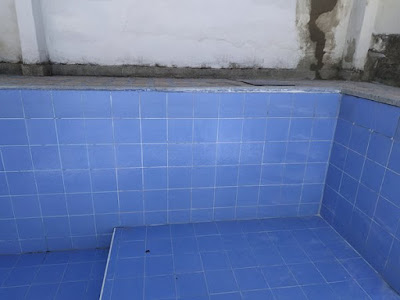 You can just make out the work the last seven tiles before the corner.

Today, I have replaced the tiles I removed from the one wall, 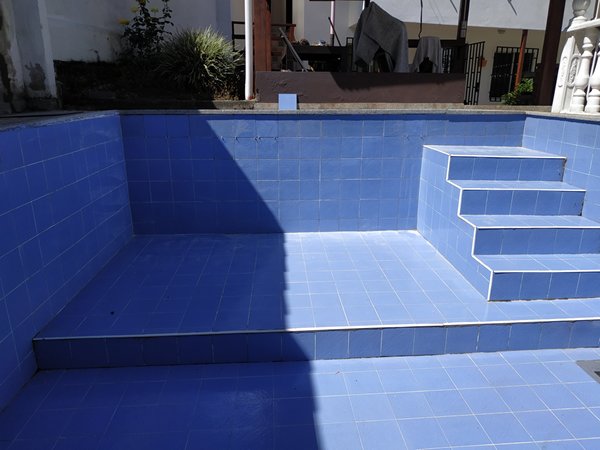 if you look hard you can make out the spacers, but I am pleased with the job, and once it is re-grouted, you would never know...I hope!

I am now going to look at the other tiles I had marked for removal, in light of our decision, I may leave them, and just continue with the grouting.
By Phil Sale at August 27, 2018

Email ThisBlogThis!Share to TwitterShare to FacebookShare to Pinterest
Labels: blew a gasket, came to a head, moving, transito