This has turned into a house of bad luck! the problems continue...

On Wednesday morning, I went for my appointment with a Psychiatrist, he believes that my memory problem is caused by depression, brought on by our current problems, if he is right, then all should come right, when we move, we now have an idea of where we want to move to, and will start looking around the area shortly, it will be cooler at night than here because we will be even higher up than we are now, but all the properties seem to be equipped with fireplaces of varying sorts, so it shouldn't be a problem. The psychiatrist has put me on medication, and to be seen again in a month, but not the same bloke, as he said I paid for this appointment, why pay for more, when he can put me on the Health Service list with no delays, so I see a lady next time.

On Thursday afternoon, we went for the appointment at the Inspeccion de la Policia, but none of the other party turned up, so we have an another appointment on Monday afternoon, and if they do not attend that, apparently they sent the National Police to bring them in. We were given the lady's personal contact number, in case we have any problems over the week-end.

One of the daughters from below, has made it her mission to try and make our lives a misery for years, it appears that now she has been trawling my FaceBook account looking for anything in the Public Posts that she can use to cause problems, and putting a totally different interpretation on the posts, spreading malicious gossip in the area, which I will be taking legal advice on. As a result I deactivated my account for a couple of days, then to stop her finding any information, I turned all my Public Posts into Friends only, then to stop her getting information from any other source, I deleted all my Colombian 'Friends', except family, and people I know personally outside the immediate area, I felt bad doing that, but it is the only way to stop the stupid behaviour of one person.

Since then, we have been advised that if the family do not turn up for the next appointment, to go and lodge a complaint for menace with the Fiscal, it is an option we are looking at.

Yesterday, the Haceb engineers came to repair the washing machine, as they had the spare parts at last, however this morning I had the same problem, an error showing it is not properly balanced, so I went and got my level out, and the machine is on a hill! no wonder it has a problem, there was nearly 3/4" difference between the back and the front. Why the Engineers, (both the one who installed the machine, and the latest one who repaired it, never checked I have no idea) unfortunately the adjustable legs are useless, there is only 1/4" adjustment, so I have had to put the front legs on a strip of wood. I knew the floor sloped away from the house, but I didn't realise by how much, hopefully now it will work without a problem.

Henry (Father in law) has been a star, he has been with us all week, as added security, to keep Marcela happy, but it has meant he has been my shadow, and this morning was an opportunity for him to go with Marcela to Bello, and see the family before he returns to Caucasia next week,  I asked him numerous times last night, but he did not respond, so when Marcela left this morning, at 6.30am, she said not to disturb him, as he was here to ensure my safety, however I don't think Henry was over chuffed with that decision, when he realised that Marcela had gone without him.

This morning after going out and cutting the hedge under Henry's watchful eye, I slipped back out and gave the main gate a coat of old engine oil 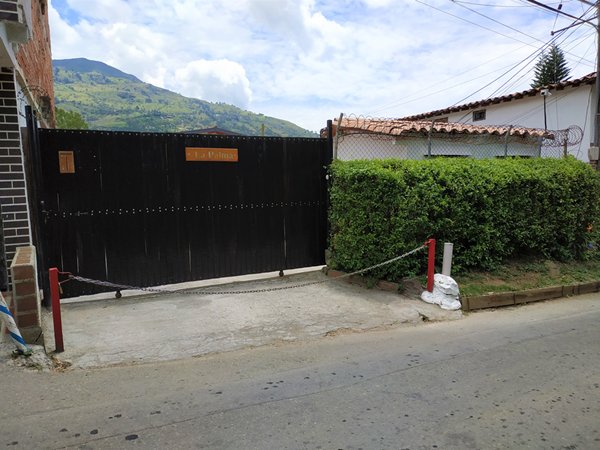 having first done the inside, whilst I was doing that, the lad who has made threats against me, came out of his apartment, got on his motorcycle, and pulled over to the other side of the road and just sat there, I could feel his eyes burning into my back, but there was no movement, and if there had been, he would have had a gallon or two of old engine oil in his face, but instead he rode off, as I suspected he would do, he is only brave when surrounded by his mates.

Henry was not chuffed when he found me finishing off in the road, without his protection, but it proved a point, I don't need baby sitting, however saying that, I do appreciate the support from the family.