At the moment all is quiet here, thank goodness. We have had no problems with neighbours, and to avoid any further confrontation, if I need any materials or gas, I use other shops rather than the Building Suppliers next door, not so convenient, but it keeps the peace. Whether that will continue, remains to be seen, as I believe the Barbers can reopen next Thursday, so we shall just have to wait and see.

I opened up the cracks in the path around the pool, yesterday, using the angle grinder, then filled them with hydraulic cement, once that had dried I painted it with the grey waterproofing solution, and now it is barely visible.

Quite what I am going to do now, to keep myself occupied, I am not sure, viewers for the house have dried up, so I don't think it will be a quick sale, which is getting Marcela down, but that's life!

I have more or less decided that the house we liked in Bello, is now off the list, not only because of the problem with it's deeds, but also the close proximity to neighbours. The other houses we have on the list at the moment, are at a much higher altitude (2100m as opposed to 1650m here), but there is a greater distance between neighbours, which I think is a better option.

Today, Marcela is going off for lunch with one of her girlfriends, and to do a bit of shopping, so I shall also go out for lunch, and do a bit of work when I come back, if the rain hasn't started again. I poured down all night, as it does most nights at the moment, so there will be no shortage of water, but at the same time, I am having to pump the pool every day. If it is left to stand without chemicals in it, we will have a mosquito problem.

Tomorrow, it's my second psychiatric appointment, I don't think my memory is any better, but Marcela says she can see an improvement in my concentration, so maybe the medication is starting to work. It could well be a long day, because they only do afternoon appointments, and traffic, crossing the City after lunch, is usually nose to tail.

I had my first live meeting with my Great Nephew, William, on Whatsapp video on Friday, he's a lovely little chap. 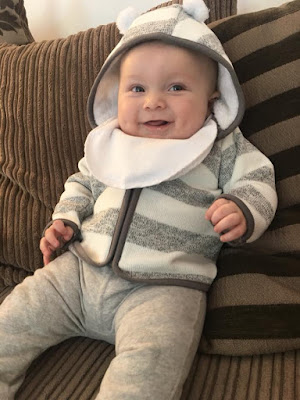 he came on screen all smiles, and on seeing me, immediately his face dropped, I'm not sure if it was because I am a stranger to him, or if it was the beard, it seems to have that effect on some children,  I thought he was going to burst into tears, but fortunately his Dad, took me out of his view before it came to that! 😂