OK, the end of the banking saga, I sent my penultimate email to Azimo, once I had calmed down, and received a very nice and apologetic reply, but confirmed they don't use BBVA Colombia, but BBVA Spain, that really set the cat amongst the pidgeons, I was told that when they state the funds are sent to their Partner in Colombia, that doesn't mean they are in Colombia, they could be anywhere in the world! forgive me, but does that really make sense?

They also stated that the fact that they advertise, and repeatedly state that the funds go into my account in Pesos is true, the fact that BBVA sends US dollars or any other currency is neither here nor there, it goes into my account in pesos, even if it is exchanged by Bancolombia (my Bank), that really doesn't make any sense, it couldn't end up in my account in any other currency, because it is a peso account. They are really clutching at straws, and I pointed out that on both counts, in my opinion they are misleading Customers, and it is just a marketing ploy to attract people like myself, and it obviously works, but is it legal, I believe that under UK law it isn't.

I was then asked how I managed to obtain my funds, having gone over the limit, I was tempted to tell them where to go, but if it helps anyone else out then fine, so I sent my final email with the details.

I haven't yet decided whether I will continue with Azimo, their exchange rates are excellent, and fee low, it is whether I want the hassle that being with them entails.

This morning I went downstairs to find that I had left the water pump on in the swimming pool all night, I had put it on about 5pm, to remove about an inch of water, and forgotten, so it had been on about fourteen hours, it was red hot, and not working, I thought I had fried it, and would have to buy a new one, but on the off chance... I put it to one side until it cooled, and surprisingly it worked, I doubt I will get away with that one again.

I then set about cutting hedges, whilst the sun was out, and the dogs made the most of the sun 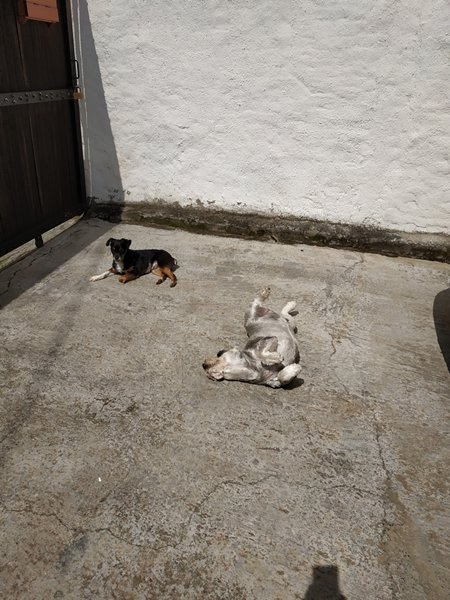 Pepe is not rolling, he is lying on his back tanning his tummy! hahaha they love it, I am not surprised because by early afternoon the clowds roll in and the storms follow, I will be glad when we are back to summer, hopefully in the next two to three weeks.
By Phil Sale at November 10, 2018