Another Christmas Bites the Dust

Well, I don't know about you, but Christmas came and went! Fortunately without incident, and every one still speaking, so the family gathering was a success...I think! 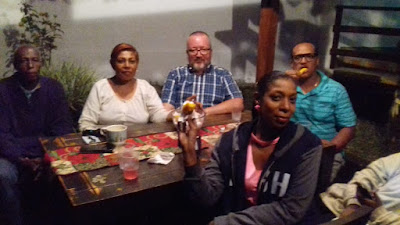 The In-laws and Marcela's Nephew are with us until New Year.

The matter of our road, is another subject altogether, despite being assured that the Alcadía (Town Hall) would clean up the road, they haven't.


to be honest it becomes more dangerous every day, it might be a case that I have to go down with a broom and sweep the gravel myself, but I am not sure why I should, I pay my taxes here, and expect they fulfill their obligations, but that is Copacabana for you.

We had a phone call yesterday to say that a Comisionista was bringing someone to view the house today at 11.30am, so it was down to work, cut the hedges, cut the grass, clean the house top to bottom, which is a task in itself when you have a full family staying on site, then at 10.45am today, Marcela got a call to cancel the viewing, the Viewer realised that the Plot is 350m not as he first thought 3500m, he obviously thought he was getting a bargain, because as the Comisionista pointed out to him, you wont even find a ruin in this area with that much land, for the price, his only option would be to go right up the mountain, where there is no vehicular access, no mains water or electric, and even then it would be touch and go.

Oh well, at least we don't have to do any cleaning for a few days!

I think I have decided that professional services in Colombia are just not worth the effort, or cost, we had an Independent Inspection done on the Nissan X-trail before we bought it, the result was a couple of minor issues, but it looks as if I may be having to fork out for a new Turbo, as we have a black smoke problem.

We took it to our Mechanic, Javier before Christmas, and he did a load of work on the car, I don't think it had had any maintenance, contrary to the assurances we were given, it even had a label stating the oil was changed 1000Km ago, but when I checked it, it was black, and definitely hasn't been changed recently, so I think the label is bogus.

Javier told us to use it for a couple of weeks and see if the problem persists, it is definitely better, and we have turbo power, but there is still black smoke, it might be residual oil in the system, but the Revision Tecnico (MOT) is due at the end of January, and this has to be resolved before then. I am not happy, but at the same time not mad, because we got the car at a good price, I can afford to do some work on it.
Posted by Phil Sale at 16:47