Tuesday, I had to be in Medellin for a 7am skin cancer appointment, yet again, I was hoping that I was about to be discharged, but the Dermatologist found that the mole he had been watching has grown, to the size, he can no longer remove it in his Clinic, I am going to have to be programmed for surgery so they can remove it for biopsy. Due to the Holiday period, and then his holidays, that will be in February.

From there Marcela and I went for breakfast, after which we went across the City, to meet up with the seller of the Nissan X-Trail, we then went with him for an independent inspection, at the same time having checks made that the car was not stolen, or under finance, we had that done with SURA, I received 20% discount because the Montero is insured through them.

The inspection went better than expected for a 9 year old car, therefore we went on for another inspection, for the insurance company this time, we are changing the Nissan for the Logan policy, which is not due for renewal until April, which will save me a few bob! again no problems, so the decision was made to buy it.

We then went to the Bank, there were a hundred or more people waiting for various things, cash desk, Assesor, Manager, and after we got my ticket, we saw there were 80 in front of us, it was going to be a long wait. After 40 minutes, Marcela struck up a conversation with a lady sat next to her, and it turned out that because I was over 60, I could get a ticket giving me priority access, so off she went, and we only had 15 in front of us, five minutes later we were seen, we could have saved ourselves a very long wait, if only we had known.

Payment made, the car was now ours, but we let the lad drive us back, as we needed a signature from his Mum who was at work, we picked her up and off to the Notary to authenticate her signature, now the transfer could be officially completed, which thanks to a friend of Marcela in the business, was done on Wednesday. 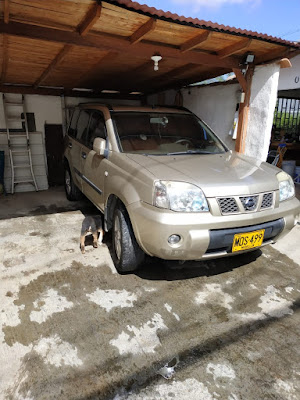 After leaving in both cars, we went to San Juan for a very ate lunch, after which Marcela headed off, whilst I stayed to go to Makro for the shopping, from the line of people waiting to pay, you would have thought it was Christmas!!! I eventually arrived home about 5.30pm.

Yesterday, I went to do the shopping in Copacabana, then went to get an estimate for having a tow bar fitted, only to find, all the business' on the site had closed and moved off...damn!

I went home, and rang Marcela, who then contacted Don Humberto, who confirmed they had been moved off, as a result he was now working out of San Juan, we arranged to go and see him on Saturday, certainly not as convenient as Copacabana.

I washed and polished the Nissan, after which I sent a message with this photo to Marcela, ending as always with 'I love  you' in Spanish, only to realise a couple of minutes later, I had sent it to Don Humberto, hahahaha! I quickly sent a message of apology, and sent another to Marcela.

I don't think many people tell Don Humberto they love him, because he seemed to appreciate the sentiment, which is very worrying hahaha.

Now, I have to find a set of tyres for the car, at present they have 225/65/16, which are hard to find at an affordable price here, so I am going to see if instead of changing just four, I change all five for 215/65/16, which will fit on the same rims, the same as on the Montero, and in the long run will be cheaper, the sad part is that the spare is 'new', in that it has never been on the road.

Late yesterday afternoon, I had a visitor, when I am sitting in the office, most days, a beautiful little Hummingbird comes to visit, tapping on the window as it collects insects, but I had nipped out to let Marcela in from work, leaving the window open, and it had flown in, then panicked, and was flying around the ceiling.


I tried to guide him/her back to the window, but it was frightened, and I did not want to scare it, so I got a broom, and put it under the bird, which then perched on it, and I gently took it to the window where it flew off, hopefully to return another day.
By Phil Sale at December 06, 2018