Bad Luck Seems to be Following Us!

Sunday, we were stuck on the mountain in the morning, because it was the 'Tour of Colombia' Cycling Event, so the Motorway was closed until mid day, not that we had intended to go out, but I still wish that they could find another route, that did not close of access to half the country for a few Cyclists.

We went out for lunch as usual, but had to be back for another property viewing, which again was another waste of time.

That night, we made a decision, that when Marcela returned from work on Monday, I was taking Pepe, our Schnauzer to the Vets for a check up, he had been sneezing for three days, he seemed fine in himself, still eating as normal, and wanting to play, so I thought maybe he had a seed or some other foreign object stuck up his nose. 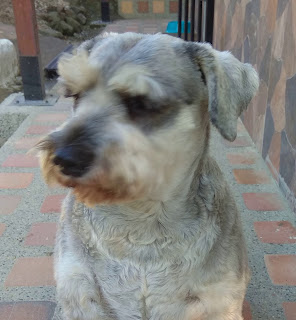 On Marcela's return, I left her with Tito, and headed down town, we didn't see Pepe's regular Vet, but Dr. Ever was just as thorough, and it isn't good news, he found four tumours, three he thinks are benign, but the fourth he thinks may be malignant, and is the cause of the sneezing.

We were given some medication, and an appointment for an ultrasound on Tuesday, I was also given instructions to obtain a urine sample, then back home we came, you would have thought we had been away months, the welcome Tito gave Pepe, it was all licks and kisses, and I was totally ignored. I hope to God they can treat Pepe, who is only six, because if they can't, I don't think Tito will be far behind, as much as they have their scuffles, they are both totally inseparable.

This brings me on to Marcela, who on hearing the news, was in floods of tears, I had prepared myself for this, and just had to be a bit brutal, we don't know the prognosis yet, even after the ultra sound, there will be biopsies if it is the worst news, so it will be a while before we know, in the mean time, Pepe is fine in himself, other than the sneezing.

We have now prepared ourselves to cancel our upcoming holiday, if it's bad news, we wouldn't be able to enjoy ourselves, wondering how he is at home.

I seem to have a curse, when it comes to dogs, my first dog was seven, he had double hip dysplasia and had to be put down, my second dog developed fits that turned him violent, and dangerous, again at the age of seven, and had to be put down, my last dog, was in Spain, he was six or seven, his age was not known exactly as he was abandoned on the street, I left him with a friend when I moved to Colombia, and unfortunately he was run over.

I have laid down the law over Pepe, and said that as long as he has quality of life, things will go on as normal, but if there is any sign of him suffering, he will have to be put down, for his sake, I couldn't bear to see him suffer, he is an integral part of our family. We can only pray that either things are not as bad as thought, or treatment will help him.

Tuesday, I was downstairs first, and lined up all the bits, I would have to take on our walk to  catch his wee! at that moment, Pepe came down, and headed for the lawn, so I grabbed the bowl and dashed out after him, as soon as his leg went up, I stuck the bowl between his legs, and bingo, he gave me more than enough...RESULT!!!!   I could forget all that faffing about on his walk, with a syringe, collecting what he decided to pass, the job was done.

Anyway mid morning we received a call cancelling the ultra sound appointment until Thursday, as the man with the equipment couldn't make it, so I nipped down town with the urine sample.

That afternoon we had another Viewing of the Finca, Marcela had impressed upon the Comisionista that it was a small lot, and he stated his Client was aware of that, he had seen the photos, I am not sure he had, because when he arrived, it was not big enough, he wanted more land, as he had a number of dogs and twenty cats, all of which at the moment live in an apartment. I am really sorry he didn't buy, it would have been a nice present to leave the neighbours, hahaha!

The Viewer then had the cheek to suggest the place was too expensive, as he was going to see another property with ten times the land for the same price in an adjoining town, and as Marcela explained, if it is a fully renovated house like ours, in an expensive area, like ours, with Pubic Transport outside the gate, and shops, school and church on the doorstep, like ours, then he has found a good buy, but there is no way he would find that in this area unless it was high up on the mountain, needed extensive work, and had no power or water supply, so good luck to him.
By Phil Sale at February 20, 2019