It's been a funny few days. The Viewer who was supposed to arrive on Saturday, never made contact, so we wrote him off.

On Sunday, I started the morning, by finishing the grouting on the swimming pool, I spent a few hours on three days last week to get it done. 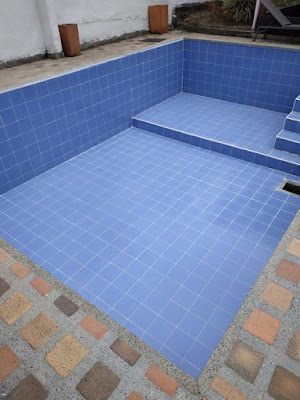 It's looking quite smart now, even though I say it myself, I am just glad to get this job out of the way, I only hope that, by leaving it empty, it doesn't start cracking again, before we can sell it.

Mid-morning, the first of two Viewers confirmed he was coming at 3pm, so we titivated, the house was already tidy from the non event on Saturday.

Marcela and I went out for lunch, returning, so we thought, in plenty of time for the Viewer, five minutes later the phone went, and the family were coming up the road...slowly, as one of the brothers was cycling!

They had a look around, and decided the place was too small for them, as they wanted to build a second house, weird how people don't read the adverts, the size of the Lot was clearly written, for all to see.

I was just going out to open the gates for them to leave when, I was approached by another man in the road, who asked if our house was for sale, and if they could have a look, I said that as soon as the others had left, he was welcome, he gave me his name, which happened to be the same as the person who had failed to turn up the day before, strange.

So the first family left, having decided the house wasn't for them, and the second family started their tour!

Marcela asked him, if he was the person who had said he was coming Saturday, but he said not, so we thought it was just a coincidence, but later on, he admitted it was him, instead of contacting us direct, he had asked us to contact him, so had put his phone number on the contact sheet, after which, he received three phone calls, all alledging they were Comisionistas working for us, so he obviously wasn't happy. It was only when he was happy that Marcela wasn't a Comisionista, that he let on...Nought so weird as Folk! I could understand his annoyance, and I was to, so I have put an addendum on the advert, stating contact is direct with us, and anyone purporting to work for us, is a fraud, what people will do to try to get business.

Anyway, the second Viewer was altogether different, albeit, he had Family and Friends in tow, he was very pleasant, and raved over the house, , but, and it is a big But, the decision is not solely his, it turns out that he and two Brothers have been left a legacy, that, they should get in the next two to three months, and they are looking for a place that doesn't need too much maintenance, that they can use as a 'Finca de Recreo', renting out, when they don't use it.

So he wants to return with his two Brothers for a second viewing, the fact that it would be a cash purchase means the paperwork problem, wouldn't be, but it depends whether they would be happy to proceed, even if I agree to continue the process, and cover the cost, which I would have had to do anyway. We will just have to keep our fingers crossed, but I am not getting excited...yet!

This morning, I took Marcela to work early, as it was pico y placa for our vehicle (cant be used between 7 - 8.30am and again in the evening), we then went for breakfast, and took her things to her Mother's as she is staying there for the week, working full time in the shop, which is a long day, eleven and a half hours. I will visit mid week, and collect her Friday night.

At 8,30am, I headed off to Medellin, firstly I went to collect my new spectacles, which are great, well, so far anyway, then I headed to La Alpujarra, to the Catastro, with a letter and all the documents they require to update the records on our property, now we just wait. I left there at 11.30am, it all went smoothly, I couldn't believe it.

From there I headed to Makro, replenished all all frozen foods, and cleaning materials, which are definitely cheaper, and made my way home, arriving about 1pm.

To say I was knackered was an understatement, but at least I had the car, and have it for this week, I enjoy the bike, but it is limiting in what I can carry on it, and getting ready, and then stripping off on my return, is a bit of a pain.

Now I am heading off to bed to read, and will enjoy having the bed to myself... I shouldn't say that, because, I know it's a lie, I already miss the 'Boss', it's going to be a long week, and tomorrow the boys are at the Peluqueria, for a shampoo and trim at 9am.