I am happy to undertake most basic electrical work around the house, but what we encountered was just downright dangerous, there were just four fuses covering the whole house, the wiring was suspect, and much of it was in conduit, stuck to the walls in any direction.

Jaime brought in his electrician, Wilfer, he knows his stuff, but we have had cross words on a couple of occasions, to the extent that now if there is a problem, I take it to Jaime and let him sort it out, Wilfer seems to think the worksite is his, if he needs something, and hasn't been given it up front, and he sees what he needs, he takes it without asking, something I wont tolerate.

He is / was also what I class as a dirty worker, he makes his mess and walks away, whereas all Jaime's Team clean up after themselves. If we were not living in the house whilst the work was being done, it would be a different matter, but there needs to be a bit of give and take on both sides. I think we have finally resolved this problem, but time will tell.

The other matter was that Wilfer kept disappearing to do some work for a neighbour, unfortunately the neighbour has not been keeping to the lockdown restrictions, and has been coming and going at will, what was the point in me spending nearly 3 months in isolation, for Wilfer to potentially bring the virus into the house? so I told Jaime the next time he left, whilst working for me, I was locking the gate, and he wouldn't be coming back. Jaime took Wilfer to one side, and there have been no mystery trips since.

Wilfer, has run electric down to the new Bodega, under the house, wired the Office, and outside lights, he does come up with some good ideas, I wanted a separate fuse box for the workshop, so he came up with the idea, of recycling the box from the house, which had to be upgraded, so he put a new large fuse box in the house, then installed the old fuse box in the workshop, but instead of running the workshop from the house fuse box, he installed new cables up to the meter in the road, being a licensed Electrician, he can do that, so it is totally independent of the house fuses.

There is also a fuse box in the Cabaña /apartment, but I think that runs to the house.

Wilfer installed  numberous sockets and lights in the workshop and laundry area, and then the most challenging job was to upgrade our showers, of which there are two in the house.

At the outset I decided the existing showers had to go, in my mind they are just dangerous 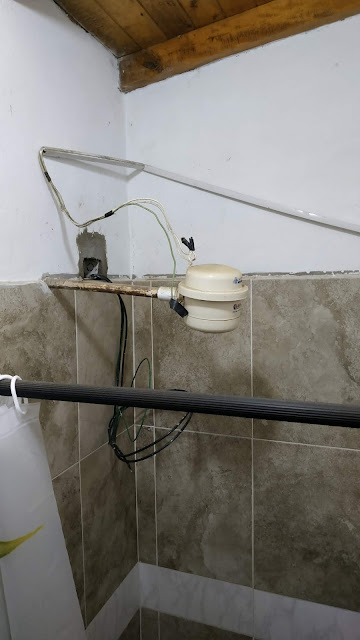 these can be found in a majority of houses in Colombia, they are cheap, and they work, but in most case like here, there are live cables joined too close to the water supply, the system works on water flow, the slower you have the water running, the hotter the water, we had these in the apartment when I first moved to Colombia, and I kept waiting for my hair to stand on end!

We decided originally to go the same way we had gone in Copacabana, and have a gas water heater installed, just for the showers, but the bathrooms are at opposite ends of the house, the likelihood was that one of them would only have lukewarm water at best. Then after doing some research I found a company in Bogota which imported showers from Germany 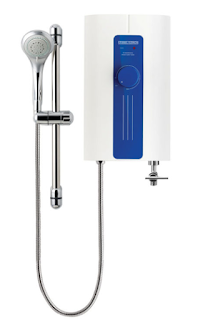 Very similar to the showers I was used to in Europe, so having emailed back and to with the Supplier, I ordered two, along with a room heater for the lounge.

I am told that the showers will be arriving today, but they will go to a friend in town, because couriers don't deliver to rural areas, so I will then have to collect them, when I am allowed out.

Going back to Wilfer, he has therefore run No.8 cables from the fuses boxes, one to the house box, and the other to the workshop fuse box, because it was the easier option, they will go on 50A Breakers, because of the size of these cables, he needed some help pulling the cables, to avoid Jaime losing a man, I stepped in, unfortunately Wilfer can't take a joke, and didn't think it was funny when I said, I didn't come cheap!
By Phil Sale at May 16, 2020