Whilst they have been hard at work, I haven't been sat doing nothing, I have had to do some improvising.

In April I ordered a steel tamper to compact the earth steps, I ordered it via Mercado Libre, which is South America's answer to eBay, but over a month later, it never arrived, so I cancelled the order, and am waiting for a refund.

I still needed a tamper, so having done some research, I decided to make my own, out of a wooden stave and concrete, along with a few nails. Firstly I bought a sturdy wooden handle on my free day, then drilled some holes in the bottom, to assist driving nails through the wood, so they were poking out on both sides, then I cheated, I waited for Jason (Jaime's No.2) to do a cement mix, and explained to him what I was doing,  so he put some aside, and mixed it with gravel to make concrete, we then placed the wooden stave in an empty one gallon washing machine soap container, filled it with concrete, and left it to dry. The nails are to stop the handle sliding out of the concrete. 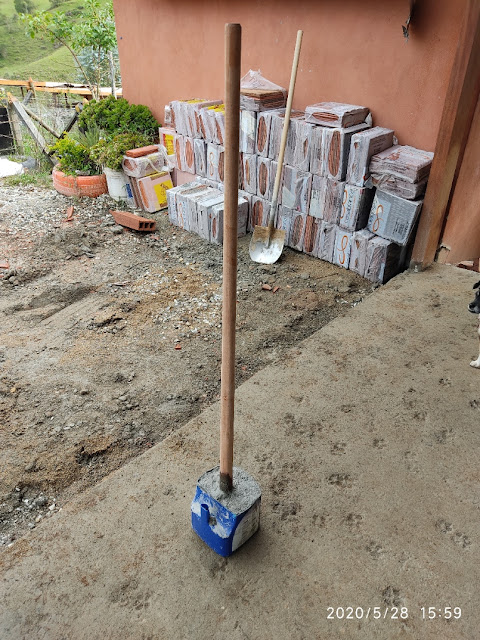 It's now been three or four days, and if it doesn't break apart, it should certainly do the job.

Yesterday, I decided it was time to start work on my machinery shed, it sounds grand, but in reality, it's going to be a post and rail shed, with zinc roofing panels.

I measured up and marked the position for my posts, then using my new post-hole auger, dug the holes a meter deep,after which, with Marcela's help, I planted the posts, which were recycled from the carport/BBQ area, when it was demolished. 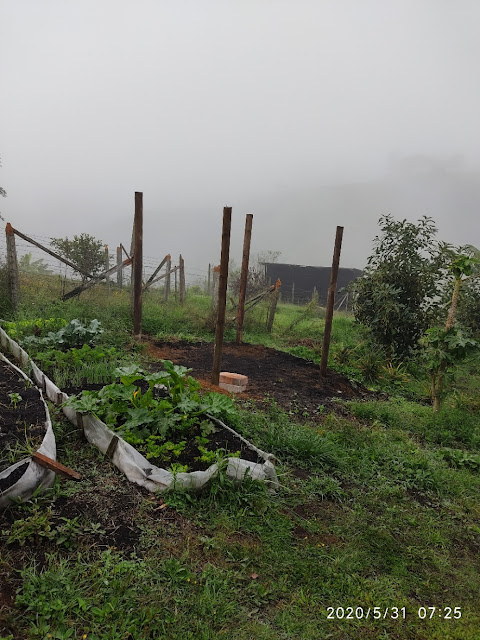 The photo I took first thing this morning, before I started work! I decided that the front posts would be 2m high, and the rear 1.5m. I cut these with the sawzall, which made life easier, then I  cut the upper rails with a handsaw, they also were reclaimed timber, I attached them with 4" nails, and then attached the zinc sheets with roofing panel screws, I already had in stock. 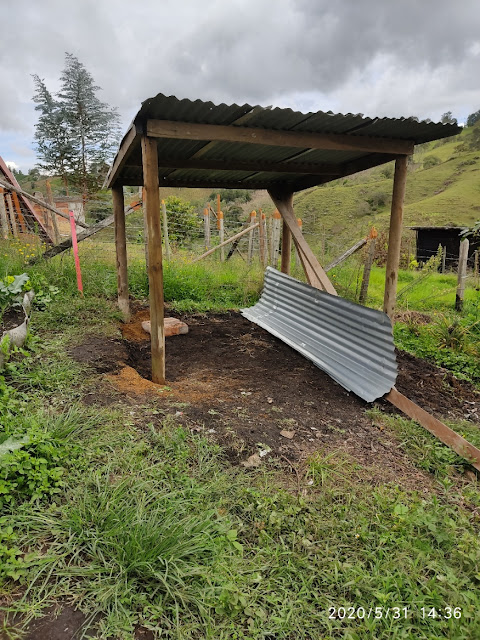 unfortunately, I gave my other roofing panels away to the Gardener ( but they were not metal), and only have two left, to do the sides, so will have to buy some more. Weather allowing I will finish the back tomorrow.

I have built this alongside the veg garden, the idea being that it is inside what will be fenced in by security fencing,  then I will use it to house my cement mixer, and rotovator (when I buy it), items too big to put elsewhere.

I have to admit that I will now be glad when the Corona Virus restrictions are lifted, it was announced last night that we are being locked down for another month, it is not only restrictive, it is expensive, many things we can't buy in this small town, or if we can they are more expensive than elsewhere. Also only being allowed out one day a week, means that if I need materials, I have to pay to have them delivered, instead of hitching up the trailer and going fore them myself.

I am one of the lucky ones, at least being a Pensioner, I have a constant income, which is more than most, but it doesn't mean that I feel lucky, and I don't for one minute think that come July 1st, I will get my freedom, and since I am well over 3 months into the lockdown, it feels more like prison than life, how those in apartments feel God only knows!
By Phil Sale at May 31, 2020