Yesterday, it was a full day in the workshop, it flew by, now I realise how much I have missed it.

I started by finding places for 'stuff' that had to be wall mounted, such as jigs, and folding sawhorses, then I put my recycling skills to the test again, I had some wire shelving left over from the move, and Marcela's dressing room, I decided to use this for a high shelf, for items I will rarely use.

As with all shelving you want it level, this involved drawing a level straight line across the wall, at that stage, I hadn't decided how long I wanted the shelf.

I had a couple of choices on shelf length, because I had shelves of 500cm, 1m and 1.5m, I made the decision to go for 2.5m, I had some pine 2x4 I had brought with me, they were cut, and then I attached the under shelf supports to the wall support, and bolted it to the wall. 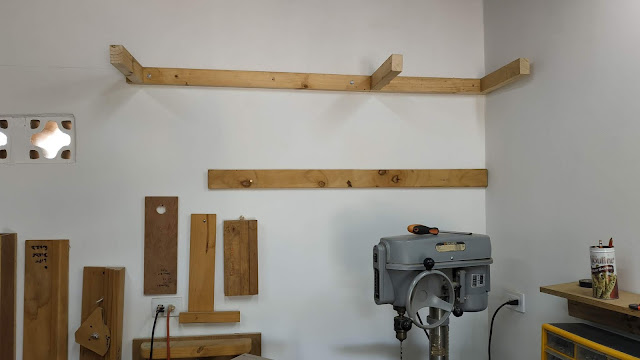 The middle support is off center, because I wanted it at the join between the two shelves.

I then attached the front bar, and placed the shelves on top, I attached them with fencing staples, it wont' be moving! 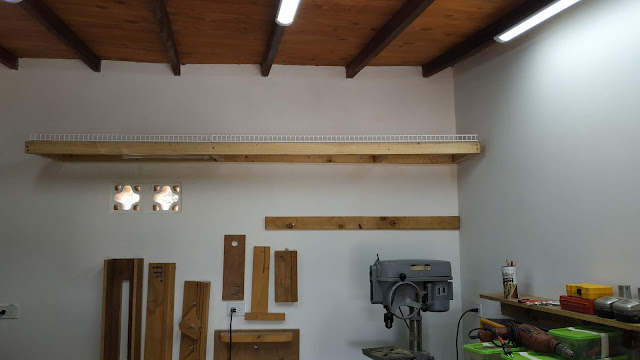 By it's very nature it wont take heavy weights, but there is plenty ready to go up there. 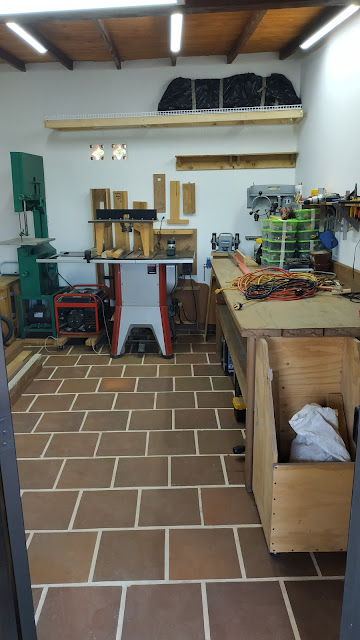 What look like two lights on the wall are in fact ventilation bricks, I had two put in each wall, there are also a number in the house, they let air through, thereby avoiding any damp problems, but sometimes in the house it can get a bit chilly, those in the house have mosquito net, siliconed over the bricks to stop the pesky buggers or anything else getting in, unless it becomes a problem I shan't bother netting those on the workshop, as the door will be open most of the time.

This morning I was up nice and early thanks to my Love! I asked her last night if Jaime was likely to be early again, and she said yes, so I set my alarm for 5am, but he didn't turn up until 7.20am, his usual time.

Jaime started the day, by saying he was going to move the kitchen base cabinets this afternoon, so thinking it was all move, I moved everything out of our temporary pantry (a flat pack  office storage unit), which Jaime and Jason (English spelling) kindly carried up to the workshop, and we filled it again. Later Jaime told us that he had changed his mind, and would not move us until he has finished the extension, and bricked in the back of the house...bugger that, the pantry can stay in the workshop!

It was then time for some garden work, first job was to move the site where we have the weekly fire, I wanted it further away from the house, and outside what will be the security perimeter, I spent a good amount of time raking and collecting anything metal that had been put in the fire, attached to wood, e.g. nails, wire etc. then any unburnt bits of wood went to the new site, which involved cutting down an avocado tree, it was barren anyway, so no loss.

That done,it was time for some real manual labour, the old fire site is going to be the base for a lean to, where I can put the bigger machinery, that can't be put inside, such as the cement mixer, and it is my intention to buy a rotovator, that can go there as well, as it will be inside the security fence.

The problem was that the site was, as is everything here, on a slope, and I wanted a level base, time to get the spade out. 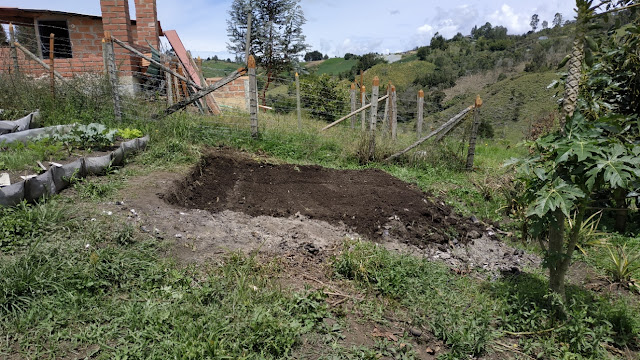 The photo doesn't show it well, but on the left I have dug out the soil and put it on the right, to level the area, after which I spent an hour walking on my heels to firm it all down.

The shed itself will be totally recycled, posts from the old carport, and corrugated metal panels from the BBQ roof, we'll see how it goes!

Now it's time to put my feet up!