OK, so I had cut the steps, for the middle section of the garden, and I really needed to make a start on access to the abyss, the steepest section of the garden, and because of the loose soil,  when trying to go down, it was a case of skiing down, because once you started sliding you didn't know when you were going to stop, unless you had a spade with you to act as a brake, also when coming back up, it was a case of one step up, slide two steps back, it was doing my heart rate no good at all.

Also there is another problem we hadn't bargained on, our gardener Joaquin keeps a couple of cows on the land adjoining us, and one of them decided it liked our side better, and pushed over the barbed wire fencing. 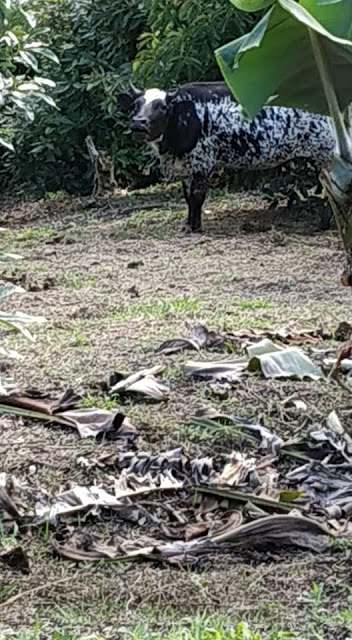 I wouldn't mind, but it decided to use my new steps, and damaged some, it also got rather close to our vegetable patch, fortunately our two dogs saw it off, I was not a happy bunny!

Joaquin, had been down with his brushcutter and finished clearing the area, it was time for me to venture below again. 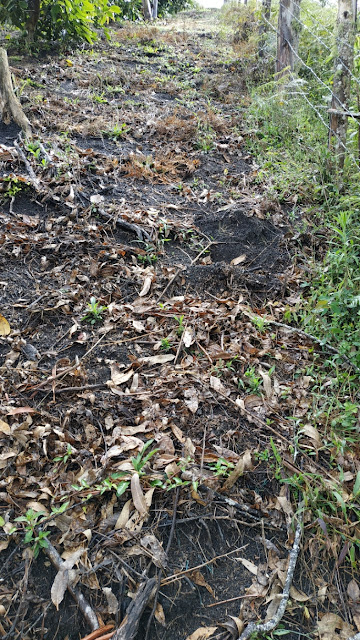 Once down there, there was no coming back without doing a bit of work!


I went to the bottom with my trusty spade, and started cutting the steps, but it was not going to plan, on the completed section, I had been able to cut them straight up the boundary, but that wasn't going to work down in the abyss, it was too steep, the steps were getting bigger and bigger, by the time I decided to stop they were about 15" deep, which was just dangerous.

I looked at various options, and decided that the garden boundary on the opposite side was not quite so steep, so I would start again over there, that is a project still underway, I seem to have lost the impetus to complete that, but I'll get there.
By Phil Sale at May 10, 2020

Email ThisBlogThis!Share to TwitterShare to FacebookShare to Pinterest
Labels: brushcutter, cow, the abyss