You will probably ask why this wasn't the first project on our list, and it all came down to space! 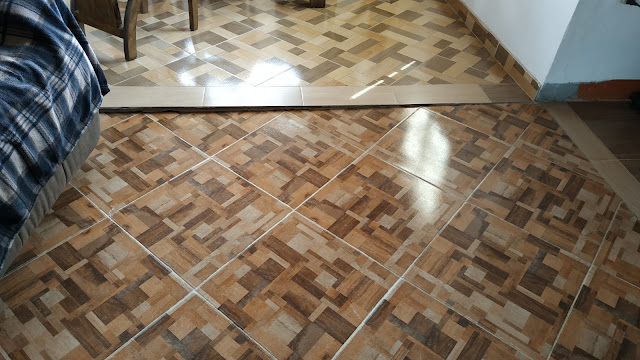 This is the floor from our lounge to the dining area. it should be totally level, we knew there was an issue, when we bought the house, as there was a 1/4" lip between the two, and it was the intention to investigate the problem and rectify it, however one day, during our lockdown, I was sat in the chair you see on the left, when there was an almighty 'crack', and I felt the movement as the floor sank yet again, now there is a 1" difference.

Jaime believes the floor was poured on top of earth without any re-inforcement, over time the earth, being on the side of the mountain, has moved, and the floor no longer has any support.

Between the two areas, is a supporting wall, this is why the dining area is not effected. Jaime is going to have to cut a hole in the floor to see what the problem is, and hopefully rectify it, either by filling under the floor, or cutting an access from the new storage area, and going under to build another wall, it just depends on the extent of the problem. 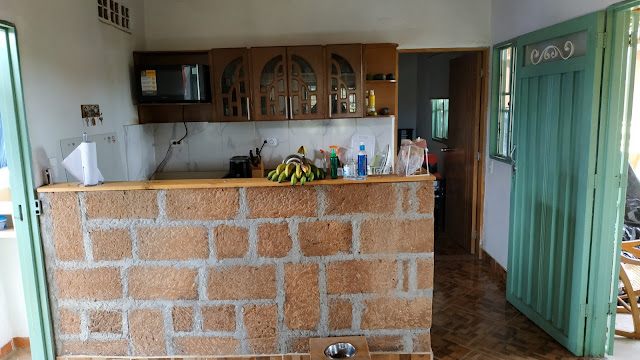 While he is doing this, he is ripping out the kitchenette, which is tiny, the wall on the left is going to be knocked out, and the kitchen extended out into the existing laundry area, and then an extension built out into the back garden, to provide a Pantry on one side, and a broom cupboard with space for the Gas bottles on the other. Marcela has already had a meeting with the Kitchen Designer, and so if it's wrong, it's not my fault...for once!

I said in my opening gambit, that the problem was space, and it is, there is going to have to be a major move around, before work in here begins. My tools will go in the workshop, which will also double as a makeshift lounge and cooking area, which is not as bad as it sounds, because like in Copacabana, I am having my workshop floor tiled, as well as the outside and the laundry area, the existing kitchen base units are going in the new laundry area... recycling at it's best, (the top units, I will either use in the workshop, or the office, and make new doors for them), and other furniture will go in the spare bedroom behind the kitchen. All the floor tiles in the kitchen, lounge and dining area are being ripped up and replaced.

I think it's going to be a few months before we are anything like straight!