It was only a simple project, but even so it was great to be working with wood again, albeit a couple of pieces of common pine.

With no sign of Jaimie and his Team returning, I was worried about some of my timber, most of which had been placed on top of my workbench in the garden, the bench is 2.5m long, and some of this timber was 3.2m, and had been subject to rain most nights, I thought if I didn't use it, it was just going to rot, plus the fact that the rain ran down the timber onto the bench under the Tarp, I had to move it, and the only way to do that was to use it!

When at the old house, I made my own saw-horses, but as will have to happen here, my two main horses had to be kept outdoors, they rotted over time, so I left them behind, time for some new ones.

An hour and a half later my replacements were finished and ready for use. 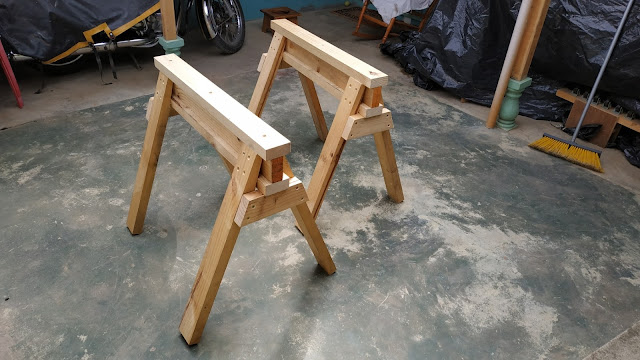 It really is surprising how a few minutes at your favourite hobby, can lift your spirits!
By Phil Sale at May 11, 2020