Last Tuesday and Wednesday, Jaime and the gang installed our new Septic tank, not without it's own problems, they dug the hole in the location agreed, and then Jaime decided that if the old tank collapsed, it would damage the soak-away for the new tank, so they dug another hole on the other side of the orchard.

It was hard work for them, not helped by the fact that it was hot.

The second day, they had it installed, all the pipes connected and working. 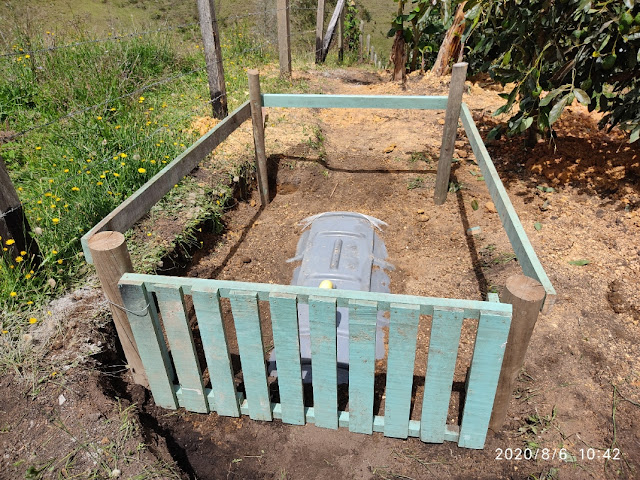 I then fenced it off, as I had the old one so that no one fell in, this one is glass fibre, strong, but I don't think that strong!
It was then time to sort out the Grease Trap, separate from the septic tank, again we had decided to move this from near the house to down the garden, and it should have been a case of just locating the existing pipes going into the old tank and re-routing them, but no such luck. Yet again the chap who built the house had taken shortcuts, and nearly all the pipes had been connected to the main septic tank pipe, this meant opening up the wall in the guest bedroom to re route the kitchen drain, and we had two options for the bathrooms, one was to dig up the floors, or my option was to break open the walls from the outside, which, turned out to be the option used, even though they had only just finished rendering them.

Our shower room was easy, and the pipes were connected to the grease trap pipe, the back bedroom shower room was a problem, the hand basin was easily done, but it turned out the shower drain was much lower in the ground than the connecting pipe, so we had two options, one to raise the floor in the shower, or leave it connected to the septic tank. We went for the latter, money is getting tight, and the amount of times it is used, wont effect the working of the main tank. 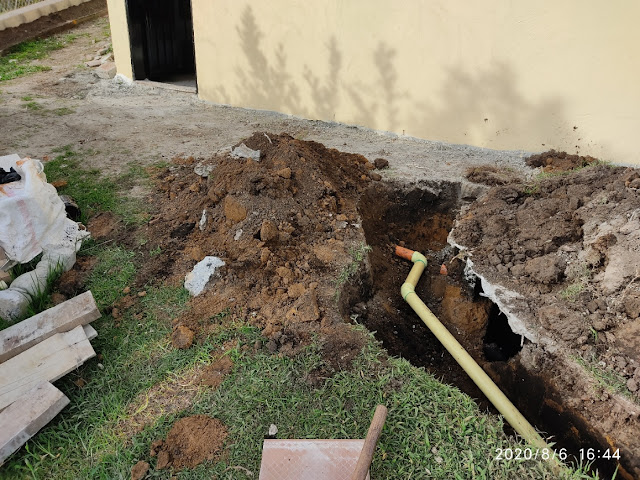 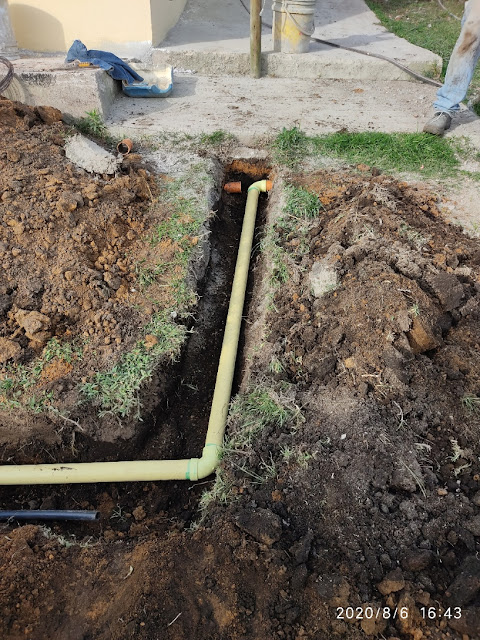 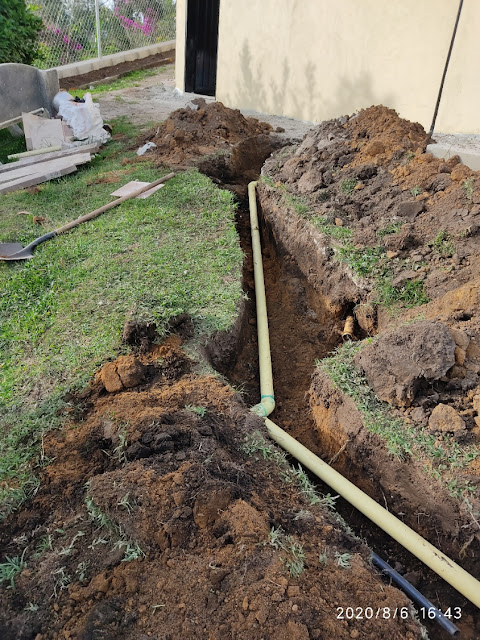 But true to form nothing goes smoothly, with the vibration of knocking through the wall to our shower room 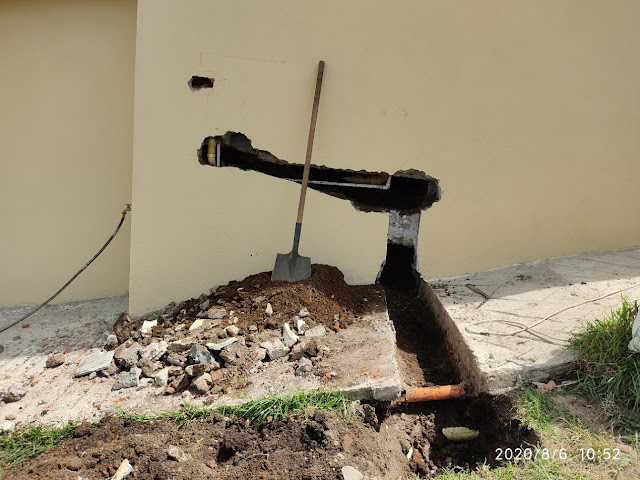 the floor had moved again, breaking the grout, and allowing water to flood out, fortunately before the new concrete had set, so we saw the problem. I said I would re grout later that evening, once the shower floor was dry.
That turned out to be easier said than done, because since I had last grouted, we had had new glass shower doors installed, and the fitter had put them on the inside of the 4" tile water retaining wall, and the grout had split behind, there is not enough room between the glass door and the wall to get a hand with new grout.

Without ripping out the floor, or calling out the installer to remove the glass doors,we needed an option to repair, and I think I have come up with a solution, that involves removing the 4" wall, and replacing it with cut tiles, which with the tile cement and grout, along with the tile, should give us a lip of 1/2" which hopefully with the glass doors, will be enough to stop water flooding the rest of the room. I have spoken with Jaime and he thinks it is workable, so we shall see.
On Wednesday evening the Mayor announced that he was locking down the town from midnight Thursday/Friday, until 0001hrs Monday, what he thinks he is going to accomplish, I have no idea, the coroner virus is already here, it is just going to complicate our lives, every weekend until the end of the month, and also stops Jaime working here, Friday and Saturday.

Thursday evening, just as Jaime and the Gang were about to leave, our plants arrived, they should have come on Tuesday, but hey...it is Colombia, so they helped unload, before leaving, and then on Saturday morning, Marcela and I started work about 7am planting all the climbers to cover the security fencing, in colour, whilst not taking up space a hedge would have taken. 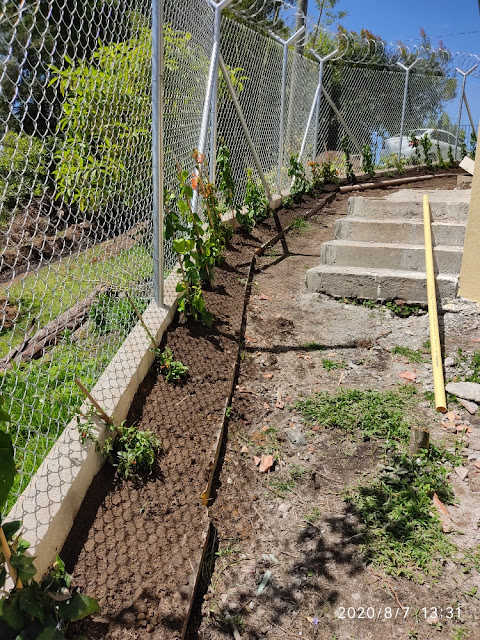 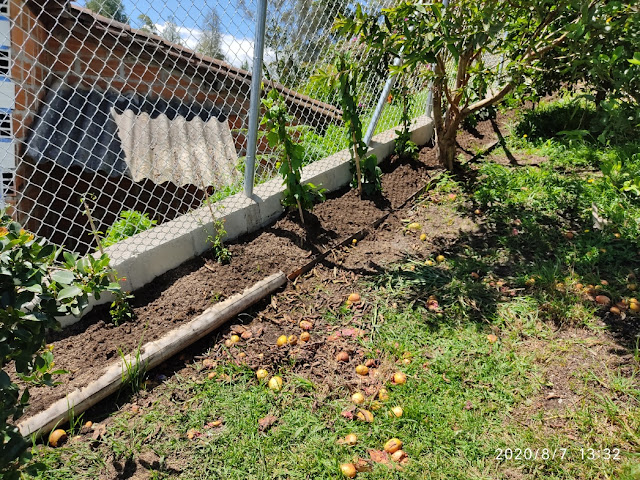 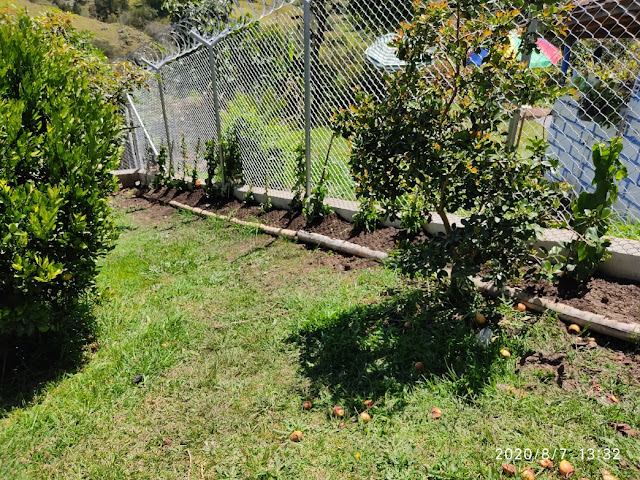 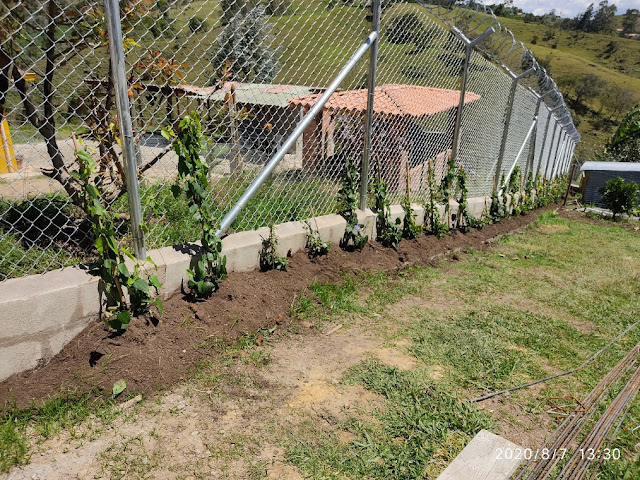 By the time we finished at 1.30pm, I was really struggling, my back was killing me, and the break were getting more and more frequent, but Marcela bless her heart, kept doing a bit more to help me out, and we got there, now we just have to keep them alive, until they have rooted in situ, which as we are now in summer means nightly watering.

Yesterday morning at 7am Jaime arrived with the Septic Tank Company, friends of his, and they pumped out the old tank, Jaime had thought it was about two cubic metres and we had been quoted for that, it turned out to be six, so we came to an accommodation, it took a while, and to help Jaime out, they pumped some of the 'water' into the new tank to ensure it was working, fortunately it is, so they pumped it out again, and now we know it will take just minutes in the future, as our new tank is just 2m cubic, enough to cater for six people.
After they had gone, other than watering the new plants in the evening, I took it easy, and will do the same again today.
By Phil Sale at August 09, 2020