I apologise for there being no updates, it has been a hectic couple of weeks...

The work took a little longer to finish than thought, but the last week was just Jorge and José, tiling, and Jorge wont be rushed, he does a great job and we are really pleased with the results of his work, which I will show in a minute.

Since I last posted the carport has been completed 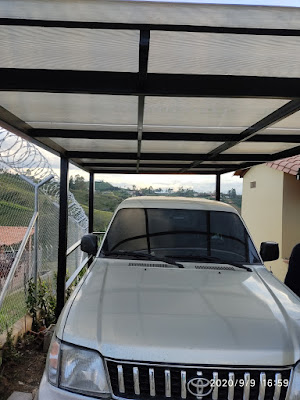 It took a bit of getting used to, gauging the reverse, because directly behind the car as you see it, is a drop, where we have a ramp down into the back garden, however, since the completion I have bought a stop, which is a rubber block, which when you contact it with the wheel, you know not to go any further!

We then had a water problem, our Water Company does not do much in the way of updating the infrastructure, and one of the main caste iron pipes broke, as a result we were without water for three days, we had warning that it would be 24hrs, as a result we had filled enough pans to last a day, and the 250 litre tank gave us water to flush the toilets and wash up in the kitchen, but it was not filtered, so we could not drink it, and there was not sufficient pressure to activate the showers.

On the third day, Marcela pestered the Company, apparently when they finished the repair and turned the water back on, it burst another pipe, they told us to go out and buy water, but as Marcela pointed out, we pay for a service, they are obliged to provide water Tankers if the cut goes beyond 24hrs, so later Nora from the water Company accompanied by a fire engine came down the road dishing out orange river water, which was of no use whatsoever, we needed to be able to wash. So we packed a bag and went down town, and rented a room in a Hotel to have a shower, we then had dinner out, to cheer ourselves up.

As a result, I realised Jaime's original advice had been right, we needed a bigger water tank to replace the 250 litre 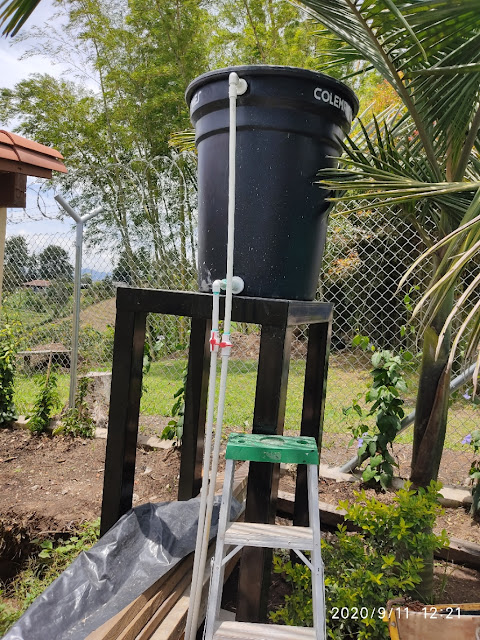 it was just too small. Therefore we bought a 1000 litre tank 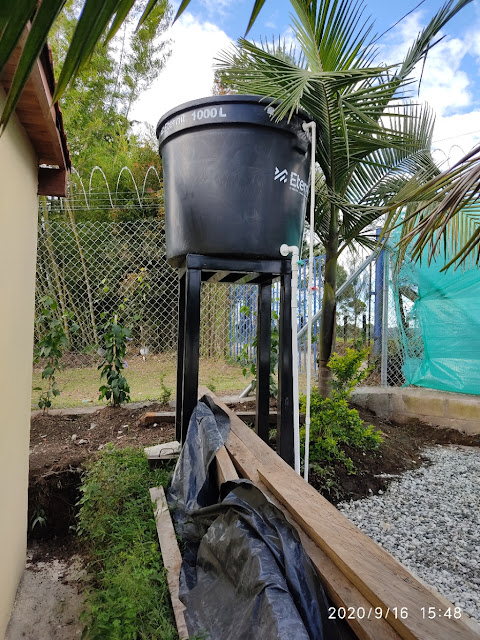 I listened to Jaime, and we changed the bottom supply pipe from 1/2" to 1",  we moved all the pipes so that the tank is filled with filtered water, fine for drinking,  between the weight of the extra water and the wider pipe, we now have a slightly better flow, and can have a shower, until the level gets low and the pressure drops.

Now we will use the tank water for a day each month then top it up, just to keep the water moving. If this becomes a problem, the next alternative will be more costly, it would mean installing a pump, and the tank would become part of the main water system, so it would be moving all the time, and I wouldn't have to open and close taps, hopefully it will not come to that.

So the current situation, is that all the tiling has been finished to a high standard, (this was taken the day before he finished) 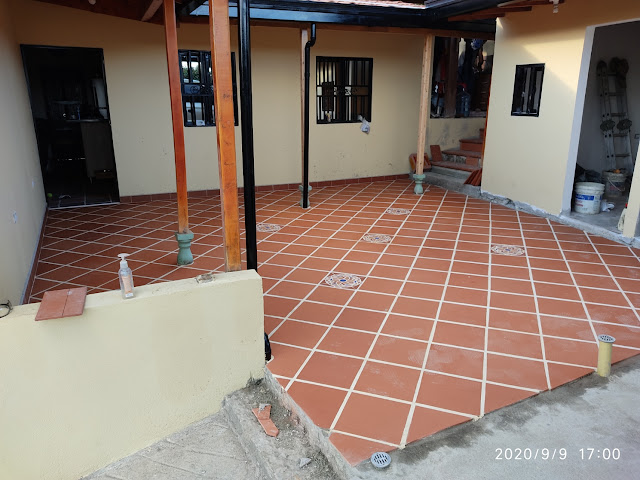 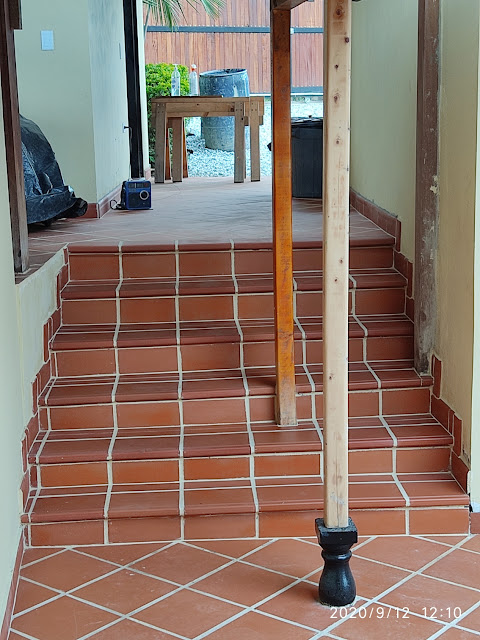 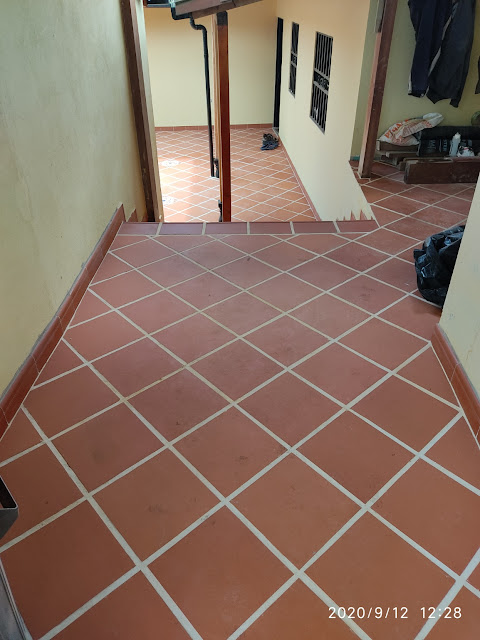 Jorge has also finished tiling in the Cabaña, in the meantime José did all the snagging jobs, touching up paintwork, staining wood etc.

We are now being held up by the Carpenter, who has to supply and fit all the Cabaña doors and kitchen, along with a new wooden front door for the house. He was paid 50% upfront, and keeps making excuses, if it wasn't for the fact that the quality of his work was so good, I would ask for a refund and go elsewhere, as it is, Marcela has had to intervene and stop me speaking to him.

Until the Carpenter comes and finishes the installation, we cant get the last two Tradesmen in to finish their work. I am seething!

At least now, I can potter again, and do the little jobs, the house gutter down pipes are just drain pipes painted black, no problem with that, but they need supports to stop them falling of the wall onto anyone nearby, so I went to the Builders Yard, but they had none in 3", however he suggested I make my own and save money, so that's what I have done, I bought a length of aluminium banding, cut it into strips, then made a template out of a section of pipe screwed to a wooden block, and production started. 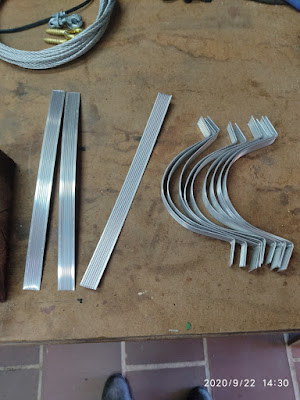 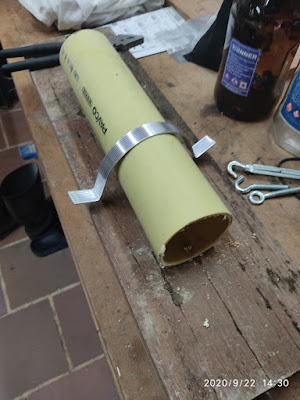 drilled holes for the screws, then fitted. 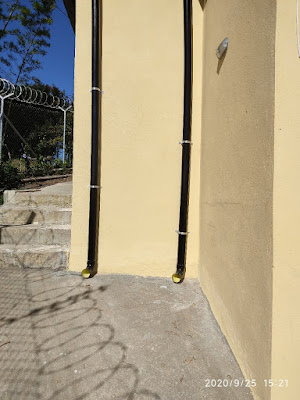 My other work, is going to take slightly longer. I have taken an idea, on a very small scale, from my time in Spain.

There was a system, whereby depending on the size of your plot, you had the right, for a small annual fee, to free water from the mountains, depending on your need, you were allotted certain times on certain  days, when you could open and close the water gates to the canals, then water your land, woe betide you, if you were caught taking water outside your time frame.

Well I have spare water, not clean water, but grey water, from the grease trap, which is water from, hand basins, kitchen, washing machine, showers and rainwater from part of the roof, it all goes down into an earth tank, and then soaks away, wasted... not any more! Now we can ensure the Avocado trees have sufficient water.

Soon I have to start my own woodwork projects, the spare room in the house, I have to build a loftbed to go over the existing double bed, and in the Cabaña I need to build a queen size bed, so I wont have much time to spend in the garden.