It's been a busy week or so, I started off installing the house alarm system, it is now up and running, the instructions were translated by someone, somewhere in China, and hadn't a clue, but since it was similar to the system I installed in Copacabana, and with the aid of a YouTube video or two, it didn't take too long.

I upgraded the siren, so the neighbours will hear it, and we have tested it out, it works!

Marcela was cleaning the spare bedroom, as I had moved the bed and furniture across into the Cabaña, when she found an unwanted guest.

fortunately it was dead, but we will have to watch where we are treading without shoes on! It was only small, and I have no idea what a bite from one of these is like, but I rather not find out.

Last Sunday we had an invitation to the neighbours for lunch, as it was their eldest son's Birthday, it was a nice afternoon, we had cazuela, which is one of my favourites, and fortunately for the the weather was nice, if a bit breezy, so their grandchildren and friends, tired themselves out running around the garden.

We went shopping to Rionegro, and amongst other things, bought a bathroom cabinet for the cabaña, when we got it home, I opened the box, with the intention of putting it up, to replace the current mirror... 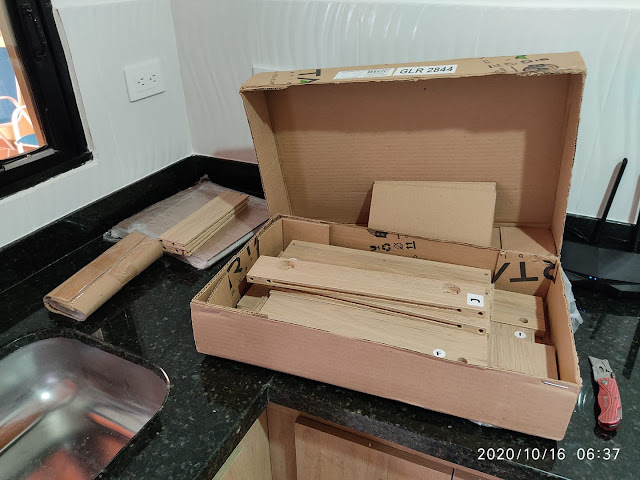 I thought flatpack was a thing of the past, anyway, it had to wait until this morning, when I assembled it, disassembled it, and re-assembled it, as the instructions we wildly out of sync, fortunately the glue had not set, and it was pretty easy to get right, once I had put the printed instructions in the bin. Now I just have to put it on the wall.

Marcela went over to the house in Bello, to meet up with a couple of kitchen fitters, and her Mother, we decided it was time to put a new kitchen in the house for her, the quotes came in much the same, but one was more modern than the other, so we went with that, and it will be installed the second week in November, at least, that is the current plan. In the mean time our old friend Diego, who did a lot of work for us in Copacabana, has quoted to removed the old kitchen, and make good, afterwards, at least I know his standard of work, so I am not worried... maybe I should be!

The last two days I have been doing a woodwork project, using recycled and left over timber. 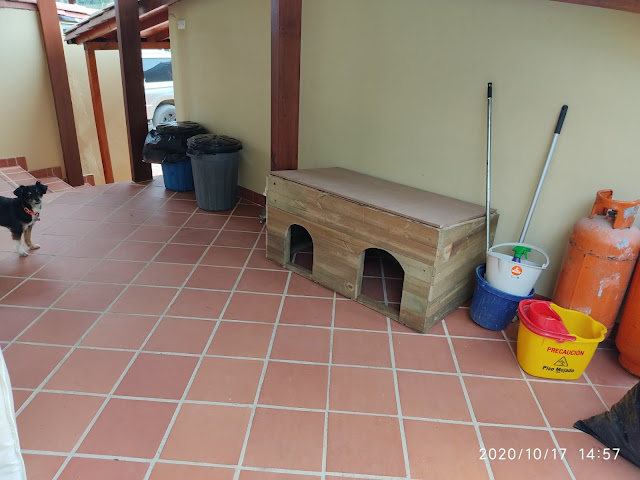 I wanted a place that the dogs could shelter from the wind, when we go out, there is plenty of shelter from the rain, but until now, I have had to leave the cabaña open for them, it is not ideal, because it is now on the alarm system, so I made the double kennel, they each have their own door, but as Tito does not like being alone, the inside is 'communal', I placed it in the washing area, so it is protected from the rain. Tito likes it, but Pepe not so much, which came as no surprise, as he never used the one I built in Copacabana, however I am hoping that seeing Tito using it, he will follow suit.

The boards are from our old driveway entrance gate, and the interior framing, are 2x2s left over from our shelving project.

Hopefully my next project will be building the double bunkbeds (double below, double above) for adults, but it wont be as easy as I thought, I went to price the timber yesterday, and they have no hardwood in stock, and don't know when they will get any, I wanted chanu or secondly abarco, but as it is used in construction, I think that all the Builders are making up for lost time, and buying up all the timber, I am going to have to do the rounds. They only had pine, but no guarantees as to quality, and here pine is the termites best friend.

This week, I am going to have to go out to buy the materials needed for the work over in Bello, and do a trip over there to ensure they are ready for work to begin, the Carpenter building the kitchen, is the Mother-in-law's next door neighbour, so he wont have far to go!