I haven't had anything to report, due to the pandemic, we have restricted ourselves to only venturing out of the house when necessary.

We did nip over to Bello last week, to look at the new kitchen we had put in the house there, for my Mother-in-law, it's a nice kitchen, but the workmanship is borderline, which is something you just have to accept here, you cant go to one company and have them do the whole job, so we had the Carpenter who made and installed the kitchen, then Mr Odd Job, who we had used in Copacabana, to do the tiling plumbing and electrics, the latter had quoted for the job, but when doing it, complained to the Mother-in-law that he was being underpaid, as a result I think he wasn't as careful as he might have been, so he won't be used again.

I loaded up the old kitchen wall unit, which I am cleaning up, painting, and using for storage in the office, just to keep up with my attempts at recycling!

In the garden, Marcela has lost her enthusiasm for the vegetable plot, so I have rotovated it, and we are turning it into an orchard, there are already orange, mandarine, and lemon trees, we have added a plum, two peach, two pear, and three assorted guayaba trees, I am looking to finish this off with two apple trees, but the local garden centre only had grafted trees a foot high, it would be years before we saw any fruit, and they were just apple, they had no idea as to variety, or even if they were red or green!

We have builders below us, as I said in my previous post, between myself and our existing neighbour, is a narrow strip of land giving access to land down below the neighbour, this has been bought in the last month, and the buyer, is throwing up a house to rent out, with little thought for anyone else. 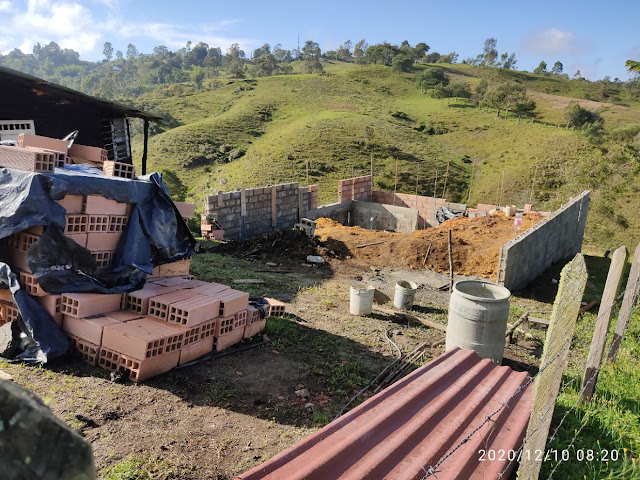 Looking at the materials they are using, I think a lot is recycling off other jobs, they have the foundation in, and have started on the walls, what we are waiting for, is to see if he blocks any of our view. There is not much we can do about it, he hasn't got planning permission, but then none of the houses up here have. There has been talk of the Mayor granting an amnesty and legalising all the non legal properties, but with the current problems, we have heard no more.

There were rumours that there was going to be a National lockdown from the middle of this month, until the middle of January, again nothing more has been said, and they seem to be opening up more and more of the closed businesses, so unless we are really unlucky, we may escape that, at the moment we are in limbo. Unfortunately our Mayor went down with the virus yesterday, so whether that will alter his outlook on the situation remains to be seen.

Marcela's family are coming for Christmas and New Year, (with the exception of her Father, who has been banned, because he has not been following the protocols), I just hope nothing changes that, otherwise she will be gutted.

Yesterday, I started some more work, putting in new posts, for the barbed wire fencing in the Avocado orchard, many of the posts had rotted, I have had the replacements for months, but have been putting off doing the work, however it has to be done, so thanks to my Auger, I was able to get six done yesterday, probably another ten to go, before I am at the bottom of the abyss, once they are all in, I will go back along attaching the existing wire. It probably wont be at taught as it should be, but as it is only marking the boundary, not keeping animals in or out, it should suffice.