The food and drink available in Colombia, was alien to me, on my arrival in the Country, yes... there are some common names known throughout the world, but there are many I have never heard of or seen before, so I thought I would describe some of those, with my own verdict on each!

As time progresses, you will discover like me, that Colombians, are not big fans of vegetables, there are potatoes, carrots, maiz and frijol beans, and some imported veg, but most meals have fruit incorporated into the menu. Also many items are deep fried, so it goes against everything I have tried to follow over recent years, however maybe Westerners don't know it all, because Colombians seem to survive well on it.

Similar to Ensalada de fruta, but usually has cream or ice-cream served as standard, a very refreshing dessert, or even stand alone snack on a hot day. The best are served up with fresh fruit, normally cut up in front of you. 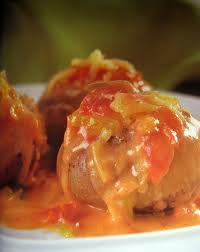 A traditional Colombian dish, comprising of boiled potatoes, in a sauce including onion, peeled tomatoes, cilantro, grated cheese, cream and seasoning to taste, this is usually served with meat, such as chicken, or chorizos. A simple but filling dish and very welcome on a cold day. 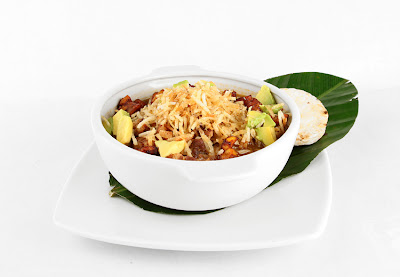 This is a cross between a soup, a stew, and a roast dinner Antioquia style, and what flavours...yum!!!
a soup of red beans (Frijoles) filled with chopped up chicharron, beaf steak, avocado, chorizo, sweetcorn, and shredded fried potatoes. Delicious at any time of the year. 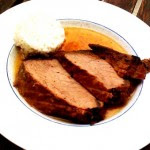 Posta Negra is a traditional dish from the Caribbean Coast, in particular Cartagena. In English, it is known as ‘Black Topside Beef’, although thanks to the variations on the recipe, it’s rare that any two servings will be the same. The meal is basically very lean, finely cut beef marinated in onion, vinegar, garlic and other herbs. Served with rice. 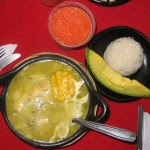 Ajiaco is a soup made from three different types of potatoes (Colombia has a huge variety of potatoes), as well as chicken, alcaparra, mozorca and rice. There are arguments about where to get the definitive Ajiaco but certainly worth trying where ever you are, and make up your own mind. 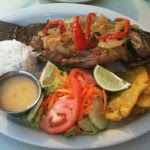 There are many variations on this, but some of the most popular dishes use Mojarra, Bagre or Sierra. The fish are fried whole, so will often come served, as they came out of the water. Usually accompanied by rice, frijoles, salad and fried platano. 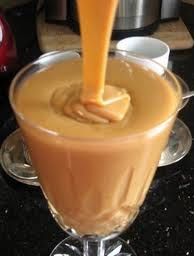 Also known as dulce de leche, arequipe is creamy and has a caramel flavor which makes obleas a sweet treat. In Colombia you will find vendors on the streets selling single two slices of obleas with arequipe in between, making them look like an arequipe sandwich while others dip fruit and cookies into it, drizzle it over ice cream or just enjoy it all by itself. 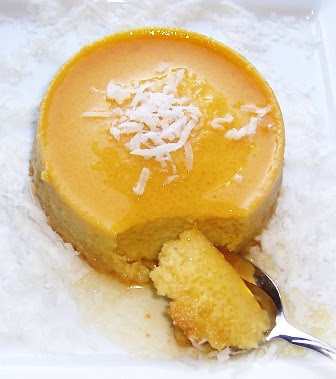 This is a dessert that is usually prepared with eggs, milk, shredded coconut and sugar and it is very popular. Its name comes from the French word flan which means flat and it was very popular in the 7th century during the Christian traditional Lent period. 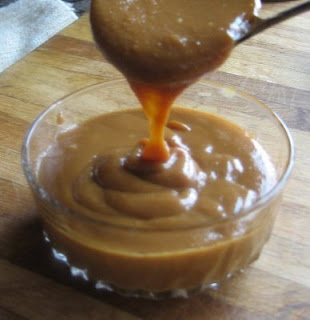 Unlike other Colombian Recipes, manjar blanco is Christmas dish made out of milk, rice and sugar which are heated for a long time and is eaten along with natilla, another Colombian dish that resembles a flan or pudding. Both desserts can be found in stores throughout the year and are usually eaten with buñuelos and hojuelas. 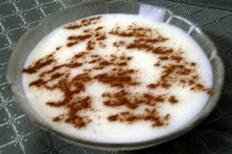 Also known as Peto, Mazamorra is very popular as a side dish to typical meals such as the Bandeja Paisa during lunch or with any other meals at dinner time. The dish is served in a large bowl and contains well cooked maize to which panela, sugar and milk are added, especially in Antioquia.
Recipe varies across different Colombian Regions but, in can generally be served as a side dish or as a single snack. 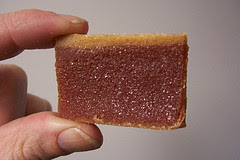 This one had me totally fooled, because in Spain a Bocadillo is a bread roll with savoury filling.
Among all Colombian desserts, this is the simplest one as it is just Guava Paste that is eaten as snacks (Bocadillo is Spanish for Snack). You can easily find it in stores in the shape of candies or as packaged paste or you can make it yourself and serve it with diced queso fresco, a sweet and salty combination that many people really like. 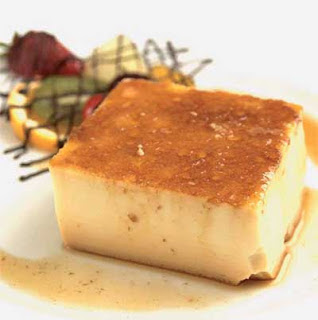 Similar to Flan and Arrequipe, this milk based dessert is loved by many and “is a good way to get kids not to reject milk”. Baked milk can be given any shape or form with or without molds and can be easy to prepare by anyone while being careful not to burn the milk at any point. 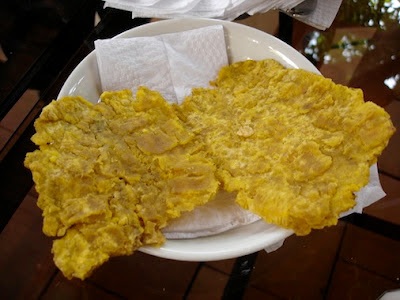 Fried, green plaintains that have been fried, then crushed and then fried again. Sounds a bit oily, but they're delicious and a touch crunchy. 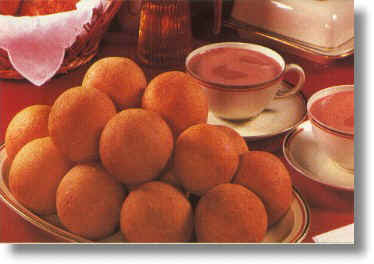 I can only describe these as deep fried cheese bread balls, they are delicious when still hot or warm, but a bit hard going once cold!

'Deep Fried' seems to be the order of the day in Colombia, but after tasting some of them, you decide that you only live once, so you might as well enjoy it.

Buñuelos are usually eaten with a hot drink, usually hot chocolate, they are sold everywhere, they are so popular, and when hungry you just stop buy one and eat it on the hoof, then if you are still hungry stop and buy another! 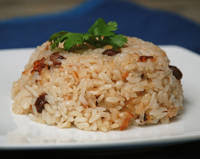 Coconut rice took me by surprise, something I have not had before, and it goes very well with seafood or chicken. It involves cooking the coconut milk until it separates and the coconut solids caramelize. The resulting toasted coconut flavor is then cooked into the rice, along with the delicious crispy bits of browned coconut. Raisins add a touch of sweetness, but this is definitely a savory rice. It's delicious served with chicken in creamy coconut sauce. A dish I enjoy from time to time, but would not want every day. 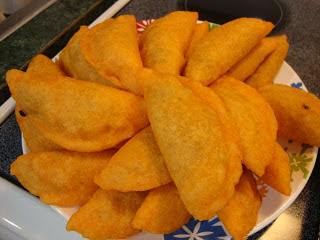 I can only describe these as miniature deep fried pasties, they are sold all over Colombia, kiosks in every road, will have these available, they tend to come in two varieties, either meat, or spicy rice, both are very tasty, and not beneficial to the waistline!

They are usually purchased as snacks, and not as part of a meal. 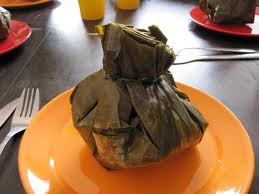 Tamal is an important dish in Colombian cuisine and you’ll find them on almost all traditional Colombian restaurant menus. There are many different variations of tamales throughout the country. The filling is chicken, pork belly, pork ribs, boiled egg, carrots, peas, potatoes, rice, condiments, and masa,  but will vary according to what is available, all wrapped with plantain leaves.

Once put together they are placed in a pan of boiling water, and simmered for two hours, the art is ensuring that the plantain leaves are properly secured, so that the content of the Tamal does not get wet.

They are very tasty and filling! 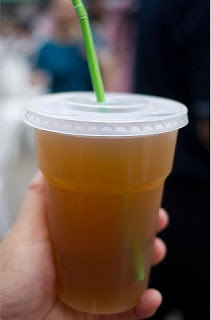 Yes, I agree it does not look very appetizing and until last week I had made a point of avoiding this beverage, then I was out with Marcela on a hot day, and she persuaded me to try it... Then I realised what I had been missing!

Guarapo, sugar cane juice, is served throughout Colombia and in different varieties throughout Central and South America. It’s a traditional drink that wound its way from Spain to the rural and indigenous communities of Latin America, although I never remember having seen it in Spain, possibly due to the diminishing cane production. Colombian guarapo consists of pressed sugar cane juice mixed with lots of ice and lots of limes. It can also be made into an alcoholic beverage. It is sweet, but not too sweet, has that fresh lime taste without the puckering sourness, always deliciously cold, and surprisingly quenching.

As you drive around the streets on a hot day, you see men with mobile Guarapo Stalls, and others with trays of the refreshing drink, wandering between the queues of cars waiting at Traffic Lights!

If you get the opportunity, give it a try, I think you will be pleasantly surprised. 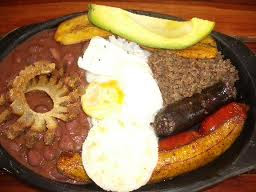 I suppose you could  compare this to a British Mixed Grill, although there is not really much comparison.

Bandeja Paisa is probably the most popular Colombian dish, originally from the Andean region of the country where the people are called 'Paisas', you will be hard pushed to find any Restaurant without it on the menu, or any household that does not dish it up at some point.

You definitely need to be hungry to undertake a plate of this! 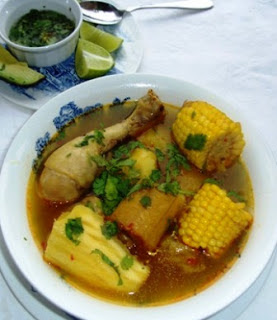 This is part of the Colombian basic diet, you can drive along any street, and families will have big pans of Sancocho simmering on a BBQ type fire outside. It can be made  from fish, beef, chicken or pork, however chicken is seen more often, It is cooked outside on a smoky fire, because this adds to the flavour, however where that is not practical, it is still cooked indoors on a hob!

This dish is a cross between soup and stew, besides the meat of choice, there is also corn on the cob, plátano (type of banana), diced potato, yuca, and fresh coriander. this is served up with white rice.

One good thing about this dish, is that there is no waste, because any of the juice left over, is saved and served up as a Caldo (soup) at another time. 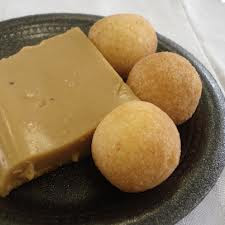 The custard, named for its cream base, also contains panela, cinnamon, and corn starch in addition to milk. It is considered to be as paisa as an arepa, but is traditionally only eaten in the Christmas season in Colombia. Originally from Europe (Flan), it is said natilla was first cooked in convents and spread around the world with the conquistadors. The Colombian version can also contain coconut, caramel, lemon, raisins, prunes or chocolate. It is usually served with buñuelos (as pictured), and unlike it's European counterpart, it is solid and can be sliced like cake. Very tasty!

OK lets add another dish to the list, Lechona, simple but very tasty, usually it is prepared using a whole pig, the meat and the ribs are separated, add seasoning, yellow peas and rice are then prepared and this is then used to stuff the skin of the pig. This is then put in the oven for up to 12 hours, on a very high temperature, causing the skin to become, what we refer to in the UK as crackling.

Don't just take my word for it, go out and try it, you'll be going back for more, if your waistline allows!